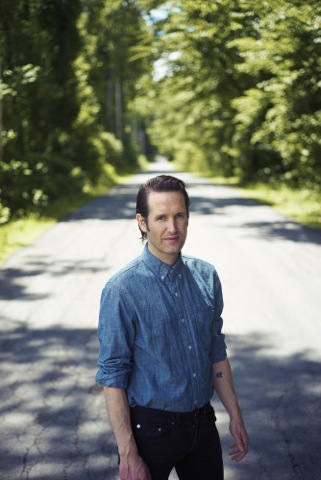 PRE-ORDER THE ALBUM FROM PLEDGEMUSIC – http://www.pledgemusic.com/projects/timwheeler

Tim Wheeler announces the release of his extraordinary first solo album, Lost Domain, a heartfelt and emotional response to the loss of his father George to dementia.  Lost Domain is released on Sony Red on November 3rd.

Lost Domain is an album in which Tim battles to come to terms with his loss, charting his father’s rapid decline into illness, his death and the tumultuous effect that it had on his life over the course of 11 songs.

But while this is a brutally open record, it’s not a maudlin one. Moments of joy and hope shine amidst the heartache.  As in Vigil, an enormously touching song which documents George’s final moments, but also celebrates the strength of Tim’s family. “It was a really hard time,” he says. “But the closeness within my family made it a powerful bonding time as well.”

The music, too, is less sparse than you might imagine for an introspective solo record. String sections, horns and electronics all combine to add to Lost Domain’s emotional wallop. Indeed, the two instrumental tracks ­ bluesy opener Snow In Nara and the jazz­tinged, 5/4­ signatured Vapour ­ are among its most affecting moments.

Now, Tim is ready to put the album out there to the world, via Sony Red, with a portion of the proceeds being donated to The Alzheimer’s Society, a charity Tim has worked closely with since his father’s death.

As Tim explains: “After losing my father to dementia, I felt the need to personally do something to fight Alzheimer’s. My friend Neil Hannon from The Divine Comedy’s father also has Alzheimer’s so we put on a concert in Belfast in November 2011 with The Divine Comedy, The Undertones and Ash to raise funds and awareness for the Alzheimer’s Society. Since then I’ve had close links with The Alzheimer’s Society and this year was involved with the Dementia Friends campaign. I’m proud to continue to support them and raise more awareness with the album Lost Domain.”

A strong supporter of Tim’s first footsteps into music, George stood by as Ash – formed by school friends Tim, Rick McMurray and Mark Hamilton – scored a Number One album before Tim had turned 21, became the youngest act to headline Glastonbury Festival and were presented a coveted Ivor Novello Award for their worldwide hit ‘Shining Light.’  “He was immensely proud of what I’d achieved” says Tim.

Lost Domain is an album of rare power and heart – Tim’s personal tribute to his father.  The work of a richly talented songwriter and musician, putting everything into a record that means so much to him, and which he couldn’t help but make.

Tim is supporting Alzheimer’s Society’s Dementia Friends programme.  Dementia Friends is a joint initiative with Public Health England funded by the Cabinet Office and Department of Health which helps people to understand a bit more about dementia and the little ways they can help. For the TV ad campaign Tim co-produced a new arrangement for The Beatles classic, ‘I Get By With a Little Help From My Friends’ which features vocals from a host of celebrities including Coldplay’s Chris Martin.  Find out more about the campaign and how to become a Dementia Friend at dementiafriends.org.uk.