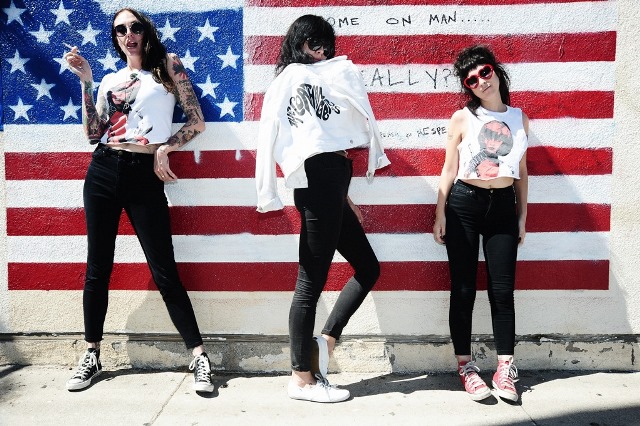 Suck My Shirt is the The Coathangers’ fourth full-length.  The title refers to an incident involving the salvaging of spilled tequila during the recording session for the album.  While the title implies that little has changed with regards to the band’s celebratory mission statement, even just a cursory listen of their latest album demonstrates that there have indeed been changes in The Coathangers’ camp.  First off, the quartet was reduced to a trio for the latest record, with keyboardist Bebe Coathanger (Candice Jones) stepping down from her duties. But the absence of keyboards isn’t nearly as noticeable of a difference as the band’s refined songwriting approach.  Refinement is an attribute we expect to see in any group that has a career spanning more than a couple of years, but the extent to which The Coathangers have honed their trade with each successive album dwarfs most bands’ maturation.  This isn’t to say that The Coathangers have polished their sound; the group once again worked with Ed Rawls and Justin McNeight at The Living Room to attain the same production values of their Larceny & Old Lace album and their recent slew of split 7”s. Rather, the refinement can be heard in the quality of the songs themselves. While the band retains the alluring spontaneity and happy accidents of their early releases, the trio’s current work sounds far more deliberate and locked-in than anything they have done in the past.

“It’s a balance between overthinking and just going for it,” guitarist Crook Kid Coathanger (Julia Kugel) says of their songwriting strategy.  It’s a duality immediately apparent with the album opener “Follow Me”.  It’s a classic Coathangers tune with the raspy vocals of Rusty Coathanger (Stephanie Luke) belted out over the signature grimy rock laid down by Crook Kid and bassist Minnie Coathanger (Meredith Franco).  But the chorus opens into one of the most accessible hooks in the band’s canon, just before segueing into the next verse with a squall of violent dissonant guitar.  From there the band launches into “Shut Up”, a title that harkens back to the brash sass of their first record. The song still has its spikey guitar riffs and shouted chorus, but here The Coathangers sound less like a jubilant version of Huggy Bear and more like the art-pop of late-era Minutemen.  Dedicated Coathangers fans will recognize the re-worked versions of “Merry Go Round”, “Smother”, “Adderall”, and “Derek’s Song” from their run of limited edition split 7”s, and hearing them in the context of the album shows that these tracks weren’t merely isolated examples of the band’s more sophisticated side, but were actually demonstrative of the group’s increasing capacity for nestling solid melodic hooks and rock heft into their repertoire.  By the time the band wraps up the album with the humble pop perfection of “Drive”, it’s hard to believe this was the band that garnered their reputation with raucous bombasts like “Don’t Touch My Shit”.

Watch the video featuring Mastodon in drag for ‘Follow Me’ HERE
“Ultimately, every album is a snapshot of who we were at the time,” says Crook Kid.  And while that might mean that The Coathangers in 2014 don’t feel compelled to chronicle the youthful piss and vinegar that yielded the Teenage Jesus & The Jerks-esque spasms of their debut album, it’s exciting to hear the output of the band as they explore the range of their temperaments with a broader musical palette at their disposal. 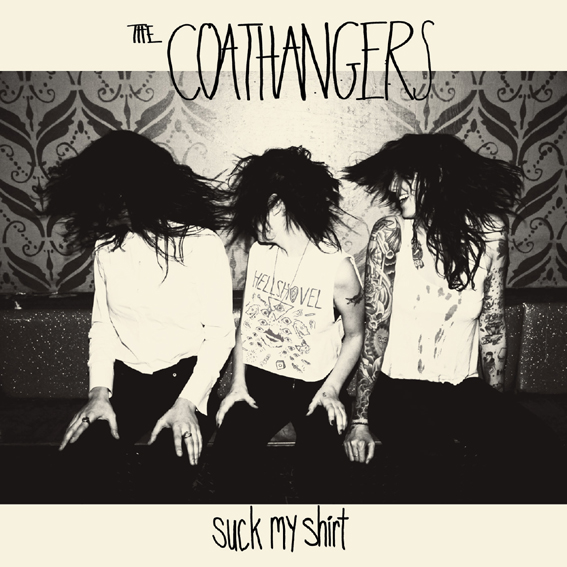 Suck My Shirt will be released in the UK on 3rd November 2014 via Suicide Squeeze Records.  The band will be touring Europe in November.