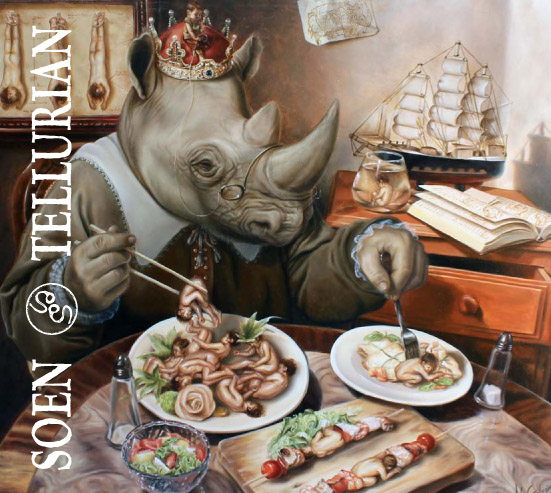 SET FOR RELEASE VIA SPINEFARM RECORDS ON NOV 3RD

IT’S HARD to put a handle on SOEN, but if progressive music is ‘entertainment for those who are easily bored’, then this Swedish outfit fits easily under that heading.

As forthcoming / second studio album, ‘Tellurian’, makes plain, SOEN – that’s drummer Martin Lopez (ex-Opeth, Amon Amarth), vocalist Joel Ekelöf (Willowtree), guitarist Joakim Platbarzdis & bassist Stefan Stenberg – are not concerned with the simple or the shallow; their musical journey takes an altogether more ambitious path, and the result is an expansive body of work, wrapped up in the stunning art of Mexican painter José Luis López Galván, that consistently challenges without being ‘clever-clever’ or tough to enjoy.

The melodies are intricate, the playing muscular and the choruses soaring; overall, the feel is one of a band – aided by Christian Andolf on keys – whose intent is very much in synch with the sort of core values (skilled musicianship, emotion over precision, importance of album artwork, etc.) that seem to be back in vogue…

Produced by Platbarzdis (who also played some of the bass), mixed by the legendary / Grammy Award-winning David Bottrill (Tool, Smashing Pumpkins, Muse, King Crimson, etc.) and mastered at Bob Ludwig’s Gateway set-up in the US, ‘Tellurian’ sees SOEN taking the approach of their ‘Cognitive’ debut (2012, Spinefarm Records) and pushing the boundaries in terms of musical scope, the whole thing shot through with the confidence of a band who have found their voice.

Rhythmic, experimental and flowing, and with the ‘muso’ side never taking precedence over a good song and a telling chorus, ‘Tellurian’ (‘relating to, or inhabiting the earth’) will appeal to anyone with an ear for quality playing, and there’s further reward to be had below the surface, with the lyrics taking a more direct route than on ‘Cognitive’, and the construction of the material – including first single / video ‘Tabula Rasa’ (‘Clean Slate’) – allowing room for the raw emotion to shine through.

Music for the head and the heart.