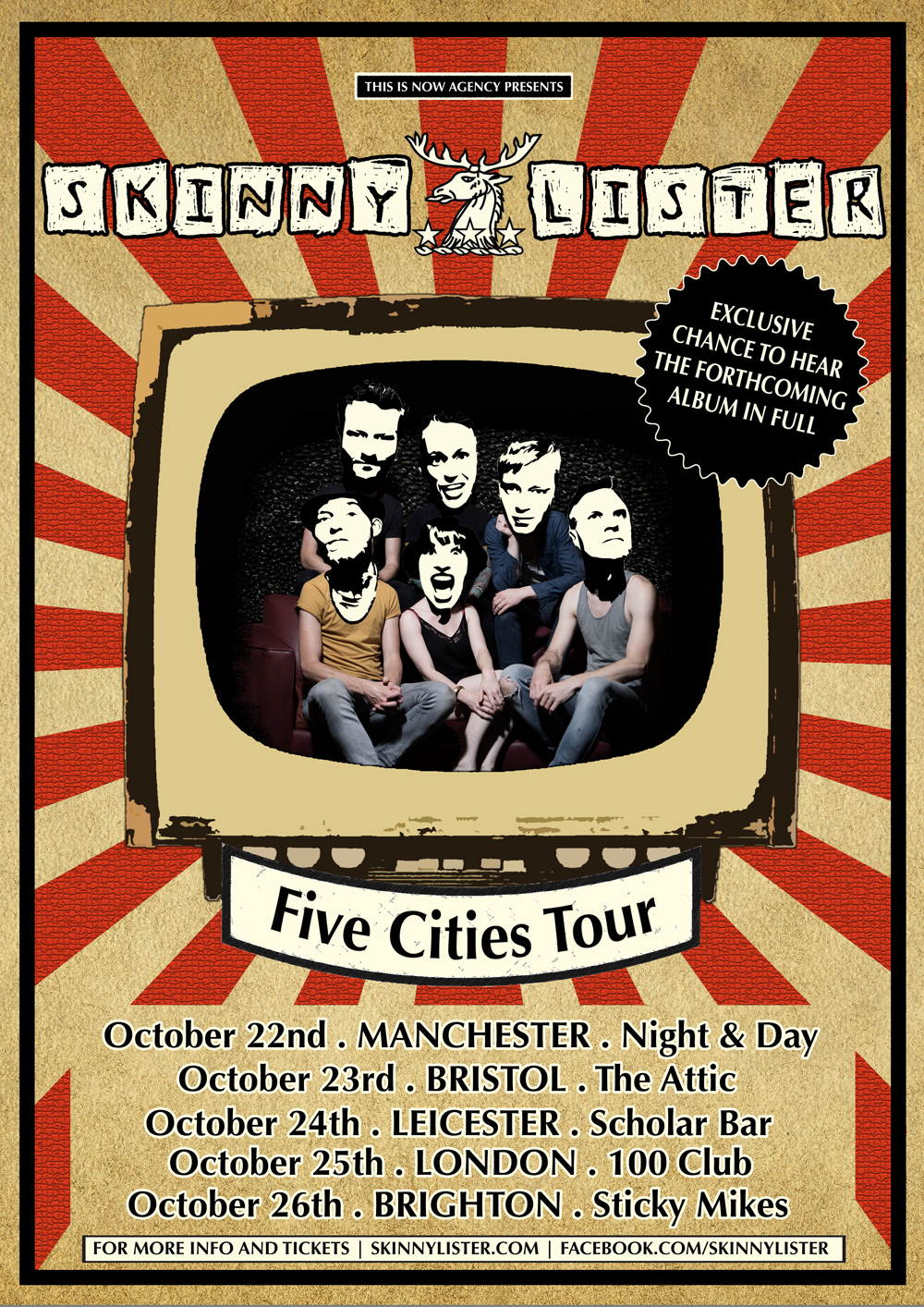 Xtra Mile Recordings are pleased and proud to announce that London-based folk six-piece Skinny Lister have signed to the label, joining the likes of Frank Turner, Against Me!, Larry & His Flask, Beans On Toast and many more. The news comes on the day (17th September) that the band play on the Main Stage at Germany’s legendary Reeperbahn music festival.To celebrate the signing, the English sextet will play five shows in five days across the UK in October. These shows will give fans the chance to hear the forthcoming album in full before its release in Spring 2015. Dates are:

Skinny Lister are no strangers to the world’s biggest stages – having performed on the mainstage at Coachella and Fujirock in 2013. Already this year they have toured the States supporting Dropkick Murphys and wowed audiences at USA’s prestigious Bonnaroo and Summerfest festivals. Back on home soil the group rocked the Avalon stage at Glastonbury, the main stage at Wickerman Festival, Cambridge Folk Festival, BoomTown Festival and Beautiful Days. Later in the year they undertake a headline tour of Japan, culminating with a mainstage performance at Asigiri Jam Festival in Tokyo.

Skinny Lister seem to have been born from the land itself. Spending time trailing all over the country, they’ve toured and recorded an EP on the Grand Union canal route, driven a Land Rover 100s of miles to play gigs every night, and played 30 festivals in 2011, winning the PRS “Hardest Working Band” of that summer.

In 2012 they played SxSW in Austin, Texas and were snapped up by the Vans Warped Tour, playing up to three times a day at the travelling festival. They also released debut album Forge & Flagon in the UK, with a US and Japan release the following year.

The band’s full bloom, spirit-fuelled folk flurry started blossoming with the nourishment gained from Leicester’s folk clubs. Adding some fertilizer from the Thameside folk community, and life lessons and experience from getting pub punters up and down the land dancing, Skinny Lister are spreading roots for their own lively, irresistible folk revival.

Charlie Caplowe, Xtra Mile Recordings’ Managing Director says: “At Xtra Mile we are always looking for acts that not only have great songs and are cracking live but who also work hard, want to play and tour all the time and share our DIY ethos. Skinny Lister fit that bill and we are excited to welcome them to the XMR fold.”

Skinny Lister said: “’We’re really big fans of Xtra Mile Recordings, and it’s great that we’re already good friends with some of the roster, including Larry & His Flask, Beans On Toast and Dave Hause. We’re proud to be a part of this growing label and it’s a great fit for Skinny Lister. Very excited for the new album to be an Xtra Mile release.’