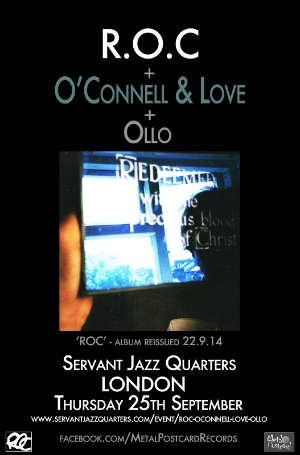 Over three albums and fourteen singles/EPs, from “God Willing” (1993) and ‘Girl With A Crooked Eye’ (1994), to 2006′s ‘Night Fold Around Me’, R.O.C have delighted and confounded fans and critics, ignoring musical boundaries to create what has been variously called “the sound of paranoia”, “toxic euphoria”, plus “startling, beautiful and addictive”.
GOD IS IN THE TVZINE

A swirl of post punk attitude and loneliness, with shards of guitars, spliced up tape, industrial noise, and spaced out, almost ambient house music, it’s all mixed up into something that sounds exciting and new and confusing and boundary pushing and essential. Its at the very essence of experimental pop, from the cut up vocals to the almost motorik like basslines to the unsettling drum loops and it sounds like nothing that’s going on right now
BACKSEAT MAFIA