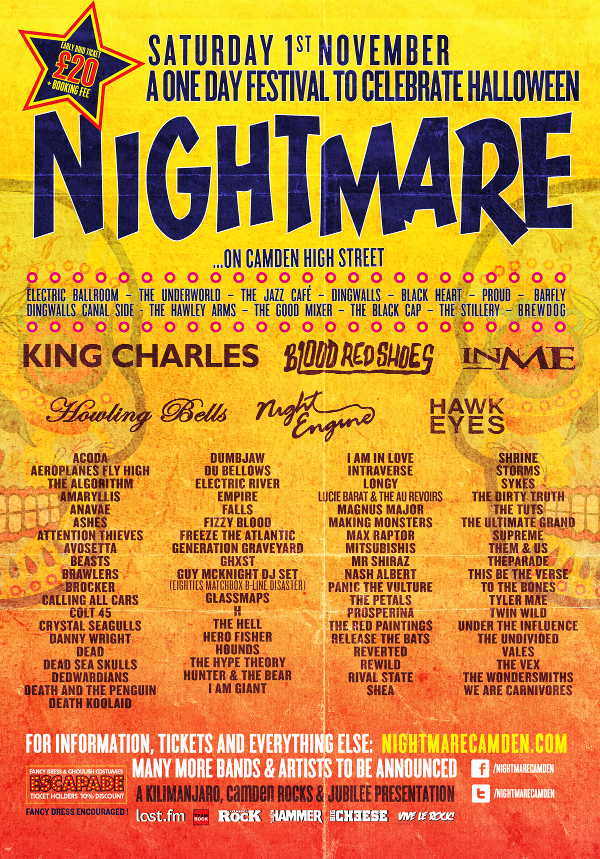 Nightmare Festival is the first time anyone has created a multi venue party for Halloween on Camden High Street and promises to be party never to forget, featuring a stacked line-up of cutting edge rock, indie, metal and punk, with ghoulish fancy dress VERY much encouraged!

Camden is world renowned for its party atmosphere and rock n roll history, so is the perfect place to host the most raucous Halloween party this year. Organiser Chris McCormack says “Camden goes mad for Halloween. People really get into the spirit of it. We recently sold over 7000 tickets for our sister event Camden Rocks in May and imagined how much fun it would be if we got everybody, including the bands, to dress up and party the day and night at the biggest Halloween party London has ever seen!”

Anonymous hardcore heroes The Hell promise to bring the party to Camden Town, with band member Black Mist saying “WE CAN’T WAIT TO FUCK THIS SHIT UP!”

The full line-up so far includes:

Early bird tickets available now for £20 plus booking fee from the link below.
www.nightmarecamden.com

Bands will be playing in the following venues, with more to be added: