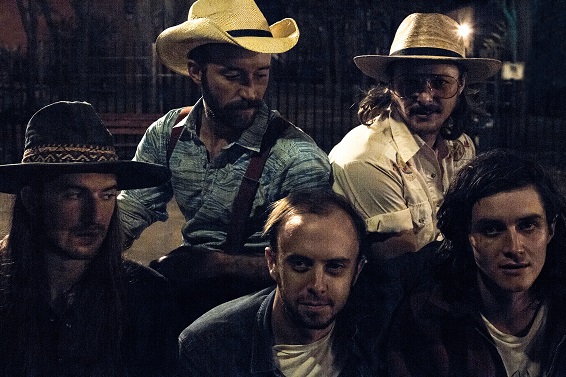 Brooklyn’s Mail The Horse are anything but your typical “Brooklyn band”. Without a concern for anything hip and trendy, the quintet has quietly been crafting honest and stunning Americana for near four years throughout the Northeast’s vibrant DIY community. Their sound is a blend of alt country, folk music, swampy blues, boozy rock&roll, gospel grunge, and everything else that makes you want to take in the evening on a front porch rocking chair. Their story is of perseverance and friendship, a natural brotherhood of kindred spirits, residing comfortably out of place without a care in the world. Whether playing in basements with punk and noise bands or being hand picked by The Felice Brothers to support their sold out New Year’s Eve show, it’s become abundantly apparent over the past few years that Mail The Horse are an exceptional live band. Brimming with energy and unbridled enthusiasm, the band make any show feel like a homecoming.

The band are hitting the road this Fall and will be releasing new music later this year, but a sneak peek has arrived. In celebration of the tour, Stereogum premiered the band’s single, “Yer So Gone (Stay For a Smoke),” stating, “there’s more going on here than just a blues-rock song, as the fractured guitar stabs and slinking organ lines make clear” and hailing the upcoming record as “something to look forward to”.

The story begins years prior to Mail the Horse, when a group of musicians and artists gathered weekly in a lofted woodshed or cold-water kitchen in coastal New Hampshire to share their work and collectively scratch some itch none of them could reach on his own. In this setting, longtime songwriting partners Michael Hesslein & Michael “Donny” Amidon and rhythm section Brendan Smith & William Lawrence discovered they shared a common aesthetic, and bonded over a love for timeless rock & roll, the short-fiction of Raymond Carver, and skewed, harrowing outsider folk music.

During the winter of 2010, through situations both fortunate and destitute, the four friends found themselves sharing a dilapidated Brooklyn duplex next door to an illegal motorcycle club. It served as a home and recording studio, and also slept many dozens of travelers, becoming known as Gates Motel. In the summer of 2011 one of these guests was Chris May, who once had a weekly gig with Brendan playing Kinks covers at a London dive bar. After hearing mail the horse, Chris learned the pedal steel guitar, joined the band, and the current formation was born.

Mail the Horse has spent the past four years at Gates Motel honing in decades of influences, from 60‘s soul to Gram Parsons to Nick Cave, into viscerally executed folk-rock. Their music conveys the fraternal bond of the members and an attitude carved out by New York City. When Mail the Horse performs it’s clear they’re a band in the purest sense of the word – rarely captured in today’s Brooklyn scene of basement break-ups. This is a working band. Their catalog is deep with albums worth of lo-fi basement recordings (with a full length due late 2014) and a handful of new songs everyday. They are currently finishing recording projects at Dunham Studios with Homer Steinweiss (Charles Bradley, Amy Winehouse) and at Business District Recording with Hunter Davidsohn (Porches., Frankie Cosmos).

Over the past three years Mail the Horse has played countless shows in NYC, from a sold-out NYE supporting The Felice Brothers to a backyard Kegger with some of Nashville’s finest bands, and three national tours riding in a dented spaceship called Apollo 11. They are in that small class of DIY bands who drag keyboards and a pedal steel into punk houses. Their music has grown mature and swaggering, and it’s turning heads and ears across the country. Do you also long for the days of rolling thunder? Can you hear it?

Connect with Mail The Horse: