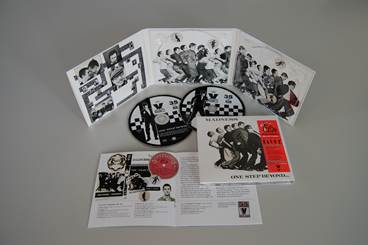 When Top Of The Pops rocketed Suggs, Chas, Barzo, Woody, Chrissy, Thommo and Bedders into our living rooms with ‘The Prince’ in 1979, Madness’ rise to stardom was swift. Spearheading the 2Tone Ska revival, along with The Specials, the band adopted an authentic attitude and philosophy that propelled them quickly into the charts. Fast-forward thirty five years and countless hits later, Madness are rightly considered one of the most important acts that Britain has ever produced.

Salvo Sound and Vision are pleased to announce ‘Madness: One Step Beyond 35th Anniversary Edition’, released 13th October on CD/DVD.

On its initial release, ‘One Step Beyond…’ coined the unmistakable “heavy, heavy monster sound” and catapulted the band from poky rehearsal rooms and sweaty gigs to the hearts of the nation. In truth it delivered so much more: sophisticated pop, vaudevillian vamps, English eccentrics and desert moonstomps.

The album stayed in the charts for nearly a year, cementing its position as one of the most seminal albums of the period. Featuring such classic singles as ‘The Prince’, ‘One Step Beyond’, ‘My Girl’ and ‘Night Boat To Cairo’, it blended lively ska, thoughtful pop, rockabilly roots, vaudeville music hall and bouncy-castle carnival vibes: “That Nutty Sound” was born.

Included in this special reissue are songs from a recently unearthed 1979 rehearsal cassette which shows Madness’ early songcraft, musicianship and giddy energy. Although not quite uptown Jamaica, you can clearly hear a band following their own anarchic compass from the off. Two previously unheard songs, ‘Sunshine Voice’ and ‘Lost My Head’, appear for the first time anywhere in any form and are certain to catch the interest of Madness fans the world over.

35 years on from its original release, ‘One Step Beyond…’ remains the rockingest rock-steady beat, the Nuttiest Sound Around.

5. Land of Hope and Glory

8. In the Middle of the Night

26. In The Middle Of The Night