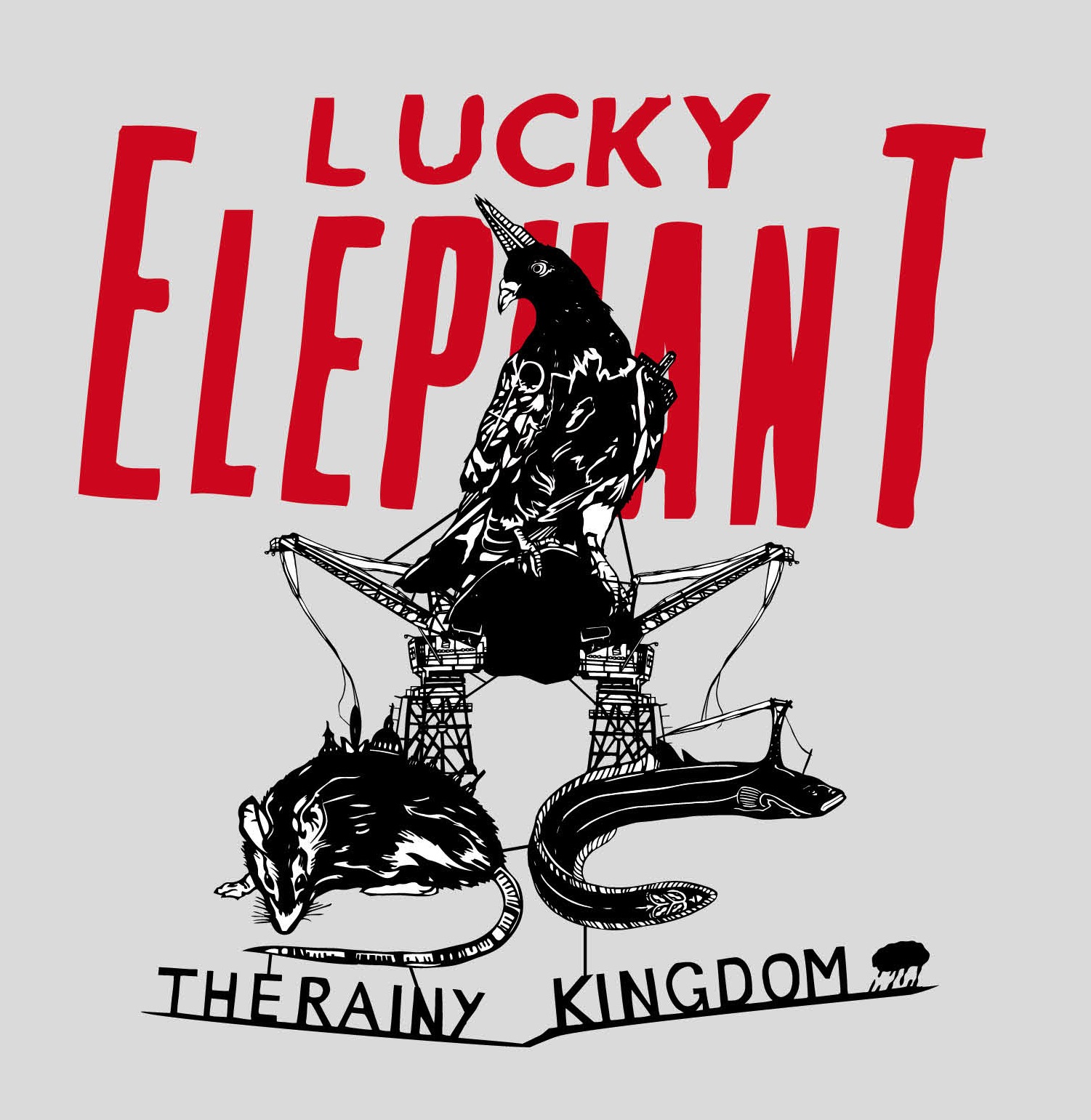 London collective Lucky Elephant are to release their new album The Rainy  Kingdom through Sunday Best on November 3. Produced by Paul Butler (Michael Kiwanuka, Devendra Banhart, The Bees), the band will support The Rainy Kingdom with a string of UK shows including Festival No 6, Camp Bestival and Bestival, plus a soon-to-be-announced multimedia London show.

As well as a deliciously beguiling listening experience in its own right, its relaxed, cat-asleep-on-a-warm-brick-wall languor recalling antecedents ranging from The High Llamas to Robert Wyatt as well as the band’s own stated influences (Penguin Cafe Orchestra, Tom Waits, Yabby You, Ian Carr’s Nucleus. Eric Satie and Les Dawson, since you ask), The Rainy Kingdom acts as a companion piece to the obscure but fascinating TV documentary which inspired it.

We Was All One, made by Ken Ashton for Thames Television in 1972, depicted the dying working class culture of the Bermondsey, Old Kent Rd and Elephant & Castle areas with beautifully bittersweet pathos, catching the moment when the traditional Cockney way of life was being dismantled, as slums were cleared, communities broken up and inhabitants sent to healthier, but more isolated tower block homes.

Deptford-born and bred keyboardist Sam Johnson knows the neighbourhood in the film intimately. His band-mates, however, bring more of a distance: fellow gadget-twiddler ‘Tall’ Paul Burnley (no, not the Tall Paul) is from Bradford, and the line-up is completed by North Londoner Laurence Clack on drums, and vocalist Emmanuel ‘Manu’ Labescat, from the south-west of France. Together, on this album, they pursue the relatively-uncharted “band as social historian” role also explored, in recent years, by Public Service Broadcasting, British Sea Power and Eccentronic Research Council.

The seed for the technique was sown two decades ago. “I used to love The Orb,” he recalls, “but those samples chucked in on tracks like ‘Little Fluffy Clouds’ didn’t have anything to do with anything. It was such a simple thing, but you’d never heard spoken word over the top of something before. It’s an interesting take on sampling culture. We’re taking that idea but using samples that are actually about something.”

Johnson discovered Ken Ashton’s documentary more-or-less by accident. “It was probably a bored internet moment, clicking around, you go down these weird alleys. And immediately, I said ‘This is amazing’. We all became slightly obsessed with it. When you’re writing you need a spark, and usually it’s heartbreak or lost love, but we used this. It was a microcosm of so much that is going on. Not just in South East London or London or England even, but the whole of Europe.”

The band’s resident Frenchman understood its significance without the need for cultural translation. “Manu linked it to the idea of the centre of Paris being cleared of ‘trouble’, so all the problems are shunted out to the Peripherique, as depicted in things like La Haine. And it’s going to take generations to sort that out. It means you’ve got lovely boulevards – well done – but it’s not how life is and it’s not how communities are. It’s a falsehood.”

As one of the elderly Cockneys in We Was All One optimistically puts it, “They say the good times have gone, but they’re not. They’re only altered.” Another old girl, however, says something which echoes poignantly in the present day: “It must be better now, because in some way or other, from birth to death, they’re looked after by the state”. If only she knew what lay around the corner. The film is equally ambivalent about the past: the death of community spirit is mourned, but the rat infestations and the lack of privacy leave the viewer with the distinct sense that the Good Old Days weren’t always all that good.

“We’re not lining up on a particular side,” Johnson makes clear, “because there are some unpleasant characters in that documentary. I’ve never felt ‘pride in an area’ – I usually find it quite ugly. And that idea of community is great in that era unless you’re black, Irish or gay. And I remember Manu once said ‘Oh putain, I love London. All these people I’ll never know, and they’ll never know me.’” The incongruity of the singer’s sud-ouest voice describing Cockney life is used to magnificent effect: “I love hearing him sing things like ‘trucks, ponies, gypsies, us’ in a French accent, and people saying ‘Well, HE wasn’t born around here…'”

The album’s opening single “British Working Man” was nearly the title track, “…but I didn’t want to spend a year explaining to people that it’s not a BNP record.” The song is accompanied by a stop-motion animation video set in a recognisably modern London (the DLR and the London Eye are both visible, as is an Apple laptop), depicting the life and repetitive routine of an office drone (imagine a Plasticene version of Jonathan Pryce’s character in Terry Gilliam’s Brazil). The visual style will evoke nostalgic associations with – depending upon your generation – Trumpton/Chigley/Camberwick Green, Postman Pat or Bob The Builder, all set in an ordered society where everything turns out alright. In Lucky Elephant’s world, however, there’s always the unsettling suggestion that things won’t turn out so well: the sight of a passenger plane passing overhead is accompanied by the sound of a WW2 bomber.

Warm and benign on the surface, but carrying a resonant, poignant, often dark tale: that’s The Rainy Kingdom – and Lucky Elephant – in microcosm.