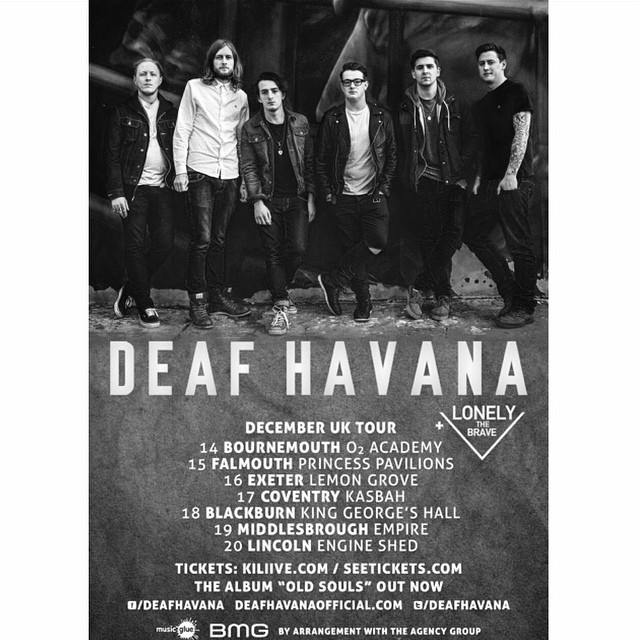 “another show, another display of Lonely The Brave’s immense promise.” – NME

“Full to the brim with dramatic anthems” – Classic Rock

BBC Radio 1 favourites Lonely The Brave today announce their main support slot on Kings Lynn rock act Deaf Havana‘s UK tour. Joining them for their 7 date tour across the UK taking in towns sometimes less traveled but no less loved, Lonely The Brave will play songs from their top 15 debut album ‘The Day’s War‘ including singles and fan favourites ‘Backroads‘, ‘Victory Line‘ and ‘Trick of the Light‘. This will likely mark Lonely The Brave‘s last tour of 2014, and a final chance this year to see the live show that has garnered them so many fans and rave reviews from the likes of NME, Rock Sound and Kerrang!

‘The Day’s War,’ Lonely The Brave’s first album, was released on Monday 1st September having been Zane Lowe‘s Album of the Week on BBC Radio 1 and received 5Ks in Kerrang, 9/10 in Rock Sound and an 8/10 in NME. This follows from an incredible summer, with the band’s festival appearances including ‘Download‘ ‘Glastonbury‘ and ‘Reading and Leeds,’ having played with Neil Young at Belgium’s Lokerse Festival and with Aerosmith at Calling in London. Lonely The Brave‘s stellar 2014 looks set to continue as the band take to the road in December supporting one of the UKs most promising bands in Deaf Havana. These shows will follow on from Lonely The Brave’s hometown show at Cambridge’s Junction venue on December 13th, which tickets are available for now –FROM HERE.

Dragged Into Sunlight to play ArcTanGent Festival in August‏