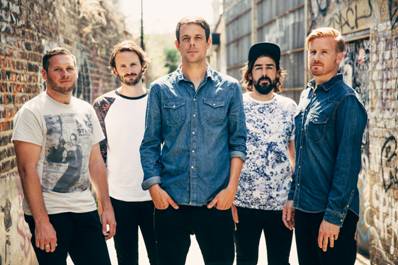 FOR NEW RECORDING OF ‘THE BLUE, THE GREEN’

“another show, another display of Lonely The Brave’s immense promise.” – NME

“Full to the brim with dramatic anthems” – Classic Rock

After having their debut album ‘The Day’s War’ enter the UK album charts at #14, Cambridge doom-pop 5 piece, Lonely The Brave today announce a fan collaboration for an alternative version of live favourite, ‘The Blue, The Green.’ Lonely The Brave will make the sheet music available for the original guitar and drum tracks, as well as new orchestration, including strings, brass and backing vocals. Fans are invited to record and submit the individual sections of the track, to be mixed and mastered together by the band for a unique recording of the song, bringing together submissions from across the globe. Here’s what the band have to say about the project:

“Our favourite songs are the ones that you take as your own, the songs that remind you of a place, a time or a moment. Something that is perhaps far removed from what the artist was originally writing about. This is your chance to make ‘The Blue, The Green’ truly yours, forever. We are so excited to hear your versions of a song that means so much to us.”

It’s simple for fans to get involved with the project – just head over to http://www.lonelythebrave.com/the-blue-the-green/ and follow the instructions. With 11 parts to choose from, ranging from Vocals to Trombone, Guitar to Cello, it’s an opportunity to be involved in a special recording bringing together the creative efforts of Lonely The Brave and their amazing fan-base. The band will then make the finished track available to stream online from November 10th.

Don’t forget to catch Lonely The Brave on the road throughout the rest of 2014: