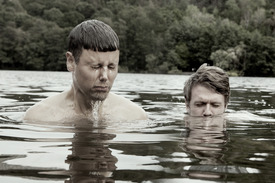 ”They said everyone could be winners. They lied.”

Those are the words of It’s a Bird! It’s a Plane! With their new single Black Flag, they make a comment on today’s society and the politics which as governed Sweden for the last few years.

– It’s a song about how the right wing has destroyed our society. They said everyone could be winners. They lied. Instead they’ve made us think about ourselves to forget about each other. They have driven people towards racism and hatred and taken off with the money while we’ve been looking the other way. We’ve had enough.
It’s a Bird! It’s a Plane! consists of Andreas Söderlund and Joel Sjöö. Since they released their debut album Here Comes the Sun in 2012 IABIAP has evolved into a songwriting producer duo working with other artists. For the moment they’re collaborating with Erik Rapp, Suvi and the upcoming soulsensation Elias Sahlin.
The music of IABIAP has become more of a folk sound. As kids they shared a love for R.E.M which is noticable in the ringing mandolins and dramatic melancholy of Black Flag. The single was recorded on the island Öland and in Stockholm. Nino Keller (Les Big Byrd, Håkan Hellström, Ceasars) play the drums.
Black flag is released on september 9th.

LISTEN TO “Black Flag” ON SOUNDCLOUD: