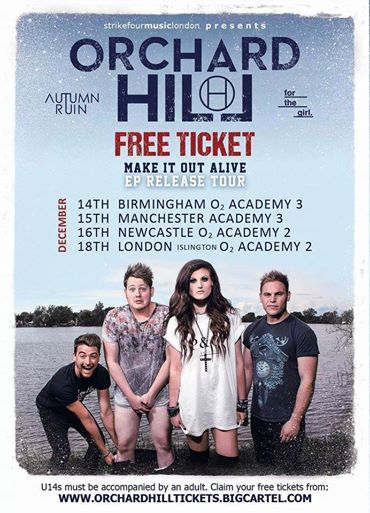 “The crowd don’t need to be told twice to enjoy themselves!”

“Strong and confident vocals from Tiff Nicholson amaze as she packs the pipes, unleashing their pop rock goodness”

Unsigned female-fronted rockers Orchard Hill will be releasing their brand new single “Make It Out Alive” on October 6th off the back of a successful August UK Headline Tour which saw the band packing venues across the country. The single marks the beginning of a new phase for the band, developing with a maturer sound in the run up to their debut EP in Early 2015.

“Make It Out Alive” contains all the hallmarks of Orchard Hill’s sound, combining layered and distinct instrumentation that support the powerful vocals of frontwoman Tiff Nicholson. With a power-pop melody built upon a heavier backbone, the track stands as the culmination of years of songwriting and gigging and finds Orchard Hill progressing into the headline band they deserve to be.

Off the back of this single, the band will be embarking on a unique UK Headline Tour where all tickets will be FREE. Playing four dates at Academies up and down the country, it will mark the band’s second UK Headline Tour in the space of 4 Months. Guitarist Jamie Rogers said “We realise that people’s budgets are a bit tight at the moment, so we think it’s time to give back to the fans who have supported us from the beginning as well as celebrating a huge year for the band”.

Now focused on the release of their debut EP in Early 2015, Orchard Hill have tightened their sound and after years of playing together are ready to take themselves to the next level. 2015 promises to be an exciting year for one of the hardest working bands on the circuit.

Tickets On Sale From Tuesday 1st October at 9AM From: