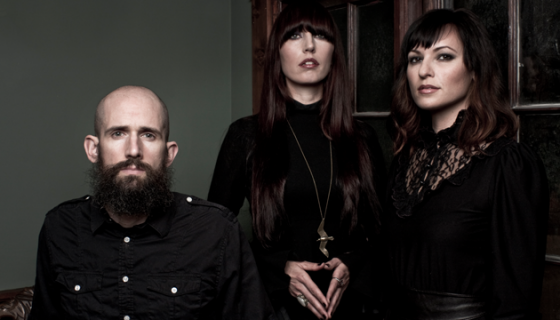 LISTEN TO “FEMEMORDE” https://soundcloud.com/neurotrecordings/ides-of-gemini-fememorde
Los Angeles-based trio Ides Of Gemini conjure the sounds of ethereal nightmares, where life, death and bereavement become one and the same – at once terrifying and enchanting, threatening yet indulging. Featuring guitarist Jason Bennett, drummer Kelly Johnston-Gibson and singer/bassist Sera Timms, also of West Coast dark-psych conjurers Black Mare, Ides Of Gemini will unveil the consuming sounds of their long-awaited Old World New Wave full-length this Tuesday via Neurot Recordings. In celebration of its imminent release, today we offer up seventh track, “Fememorde” for public consumption.
“‘Fememorde’ is the first song that was written for Old World New Wave, and appears on the ‘new wave’ side of the album. In that sense, it was the impetus for the entire Old Word New Wave concept. It’s a completely different kind of song for us – probably because all the guitar parts were composed in my head rather than on an actual guitar. That hadn’t happened before and hasn’t happened since. So I’ll chalk this one up to something like destiny.” notes Jason Bennett on the hymn.

In related Ides Of Gemini news, the band will take to the stage this Autumn on a pair of live performances, the first serving as the trio’s official record release gala in Los Angeles, the second playing Intronaut’s tenth anniversary show. Additional Ides Of Gemini ceremonies will to be announced in the coming weeks.
Ides Of Gemini Live:
9/19/2014 The Complex – Los Angeles, CA Record Release Show w/ Ancestors, Glaare, Maja D’Aoust (as The Oracle) [info]
12/18/2014 The Roxy – Los Angeles, CA [info]