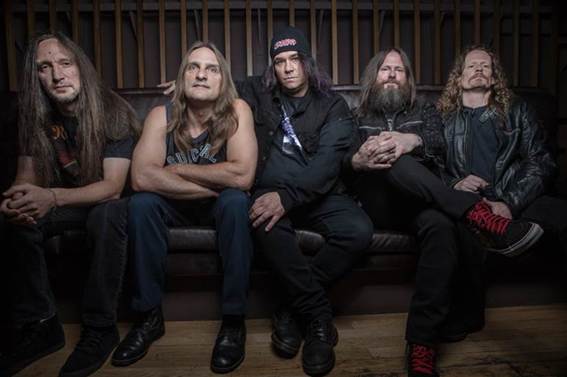 Bay Area thrash metal provocateurs EXODUS proudly announce the special guests appearing on their latest showcase of unrefined rage ‘Blood In, Blood Out’, the band’s tenth studio album due out on October 13th.

Crafting an industrial sound bed on the intro to the album opener ‘Black 13’ is electronic music producer Dan the Automator(GORILLAZ, MIKE PATTON/LOVAGE, DELTRON 3030).

“We ran into each other a couple times,” shares EXODUS guitarist & songwriter Gary Holt. “I knew what I wanted to hear and I knew he could do it, and could do it that day. So we sent him a file with the drums and guitars we already had there and just told him to go crazy with it.”

TESTAMENT frontman Chuck Billy lends his signature roar to the track ‘BTK’, one of the first songs recorded by returning vocalist Steve “Zetro” Souza, who recently said, “Chuck and I have known each other forever. We work really well together, we know each other really well. So if I’m doing my vocals and he’s there, I can trust him to go ‘No way Zet, doesn’t sound good like that. Do it like this’, or ‘Yeah that’s killer’. If he says it sounds killer, I know it is.”

“This was actually the first time Kirk got to play on an official EXODUS release,” states Holt.  “He did the early demo, and then joined Metallica and didn’t do anything with us after that. So he was totally gung-ho about it. He came down and ripped out a bunch of takes and we picked the best one and then had a barbecue and drank beer.”

“It felt really casual, really cool – just like it did back in 1980 when we were all just hanging out back in the day”, Hammett confessed toRollingStone.com in July.

Tracklisting for ‘Blood In, Blood Out’ reads as follows:

-‘Blood Upon The Goat’ making-of footage

The digital version of ‘Blood In, Blood Out’ will include the digital bonus track ‘Angel Of Death’ (ANGEL WITCH cover).

The album’s Japanese edition includes the ‘Protect Not Dissect’ bonus track featuring Rat from THE VARUKERS/DISCHARGE.