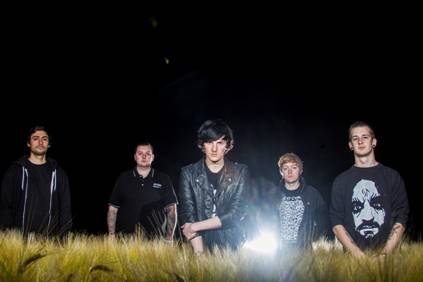 TO RELEASE DEBUT SELF TITLED EP on 12” VINYL

Having revealed their debut self titled EP, 2 months ago, a lot has changed for Southampton 5-piece, Creeper. With plays on the BBC Radio 1 Rock Show, support from Kerrang Radio, XFM and Team Rock, as well as coverage from Rock Sound magazine and Kerrang!magazine, Creeper have also played a sold out Southampton Joiners headline date, as well as making their debut outing in the capital, headlining one of DIY magazines ‘Presents’ nights to a packed to capacity Old Blue Last. Having most recently supported Gnarwolves on their album release show, things only look set to continue to blow up for Creeper.

Today, along with Palm Reader Records, Creeper announces the release of their self-titled EP, on a physical format for the first time. With a limited run of 300 12” vinyl, with 100 on ‘Creeper Purple’ and 200 on black, this will be the only chance to get a truly special release from an equally special band. Each vinyl will come screen-printed with Creeper’s mansion logo, seen on their t-shirts and will be available online via Palm Reader’s web store and at Creeper shows from 8th December onwards with pre orders live from today. The EP was recorded byNeil Kennedy (More Than Life, Landscapes) at The Ranch Studios and mastered by Alan Douches (Brand New, Saves The Day, Alkaline Trio).