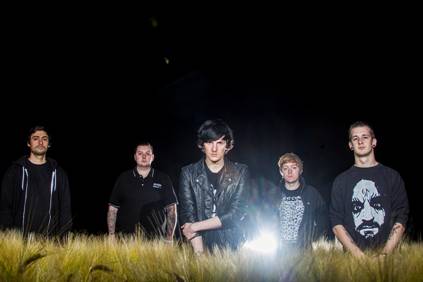 After an overwhelming response to their debut self titled EP, Southampton 5 piece, Creeper, today reveal their video for the single ‘Gloom’. With the single already having had plays on BBC Radio 1, courtesy of the Rock Show’s Daniel P Carter and with support for the track from Ian Camfield on XFM, Alex Baker at Kerrang Radio and Sophie K at Team Rock Radio the video was premiered yesterday onKerrang.com. The band will bring their live show to London at a  DIY Magazine promoted headline show at The Old Blue Last on the13th September, having previously played to a sold-out Joiner’s in Southampton at their first ever live show.

Including members Will Gould and Ian Miles previously of punk outfit Our Time Down Here, Creeper is a new chapter and a journey into the world of dark melodic punk – taking in 5 tracks including the already fan favourite ‘Gloom’. Joined by Sina Nemati (ex. Hang The Bastard), Sean Scott (Doomed From Day One) and Dan Bratton (ex. Ghosts on Pegasus Bridge, The Afterparty). The EP was recorded byNeil Kennedy (Polar, Giants) at The Ranch Studios and mastered by Alan Douches (Brand New, Saves The Day, Alkaline Trio).

DETAILS ON 13th SEPTEMBER SHOW at THE OLD BLUE LAST

HEARTSOUNDS Premiere New Music Video for ‘A Total Separation of Self’