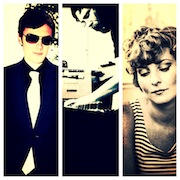 The pioneers of undersea dream pop, Aqua Alta, announce the UK  release of their eagerly anticipated eponymous debut album on September 30th 2014 through Star House Collective.    “You Were A Kid Too” is the first track to be taken off the album.

Austin describes Aqua Alta’s musical direction as “simply to make country music for aliens.” Shimmering vocals glisten a top of driving beats and churning synth pop noises led by the pair of Austin and Campbell, while Grant handles lyrics and vocal melodies. Together their electro love songs provide the perfect listening remedy for the voyage if you so happened to become lost at sea.

Aqua Alta was self produced and recorded Echo Chamber in Halifax, Canada and is set for release on September 30th 2014 in the UK.