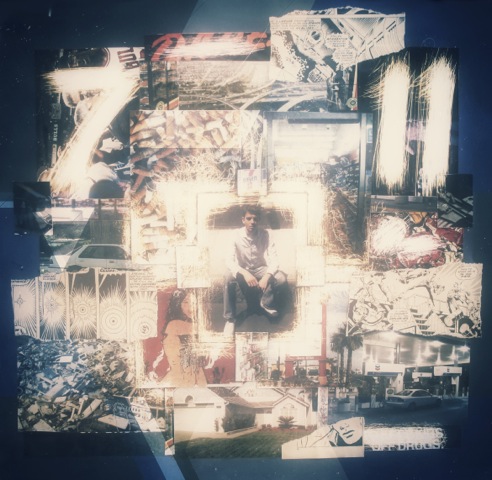 Bo Keeney’s ‘7 Eleven’ EP is three tracks recorded in a Hackney basement shared with longtime friends and collaborators Flyte and Bombs exploring ideas of excessive consumption and waste, centered on his upbringing in San Diego. Additional production on the EP comes from fellow electronic artist Ben Devries and Jake Williams of Flies + Flies, and each track has been given its own deluxe visual and video treatment.

‘This one is a creative re-edit of the vintage archive film ‘Spirit of 77′ directed by John Hodgson and centred around 70’s Orange county/Los angeles. For the re-edit, the clips have been rearranged to correspond with or be juxtaposed with the lyrics – the correlation with the lyrics becomes more clear each time you watch.’ Bo Keeney

Both Bo’s debut EP ‘Don’t You Worry’ and follow up ‘Versus’ were released by Universal under the guise of independent label Stranger Records and his own temporary label Brew Box. The former showcased Bo’s unusual hybrid of sounds, with energetic drum n bass rhythms and new age funk providing a backdrop for his smooth vocals, and came with remixes from Breton and Magnetic Man collaborator Sam Frank. ‘Versus’ was released last year and saw Bo teaming up with more hand picked UK producers – this time Throwing Snow, Spectrasoul, Bobby Tank and Black Butter upstarts My Nu Leng.

‘7 Eleven’ marks his departure from Universal after 4 years with the label, citing an overall disconnection between himself and the people he initially signed to. The release coincides with a move to Berlin for a creative season, consolidating and assembling new and unreleased material for his subsequent releases this year.