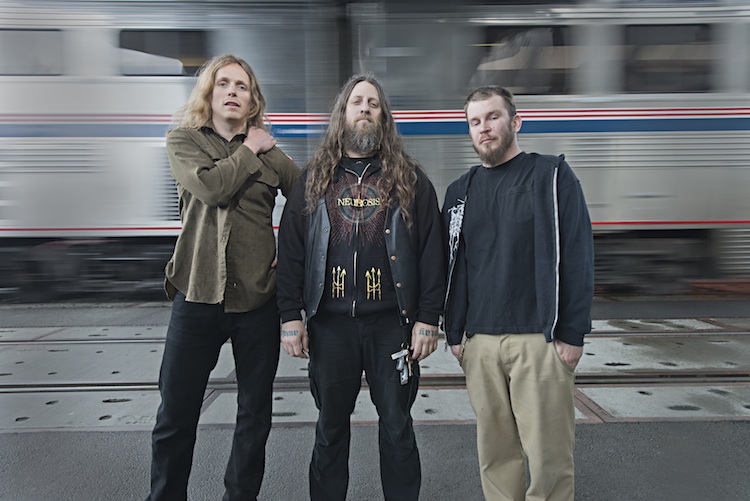 As the release of YOB’s forthcoming album Clearing The Path To Ascend dawns, the band reveal one of the four tracks on it, the brutally heavy “Unmask The Spectre”. The band have already revealed snippets of the track via their album trailer, now it is time to hear the whole thing. Here’s what Mike Scheidt has to say about the song…”This part of the album gets dark, but it also has a sense of beauty and resolve. The mood and atmosphere nod equal parts to old and new YOB. It’s one of my favorite things we’ve ever done.“
HEAR THE DARK AND BROODING SOUNDS OF “UNMASK THE SPECTRE”
http://soundcloud.com/neurotrecordings/yob-unmask-the-spectre
Clearing The Path To Ascend is an aptly titled album for what will undoubtedly be the crowning achievement for a band whose journey now nears two decades of creating music as commanding as it is cathartic. As is the YOB way, the tracks here don’t simply offer a vacuous glimpse into the already riff-soaked doom genre. These songs demand the tandem attention of mind, body, and soul – etching a mark across a sound that finds YOB as formidable and unequaled as they’ve ever been. True ascension requires a destruction of those barriers that prevent any movement forward. Unsurprisingly, YOB pummels any and all of these obstacles with absolute authority, clearing the way for a genuinely visceral listening experience and climbing upward into a realm that sets the band in a heavy metal place that has been and will always remain wholly their own.
Recorded at Gung Ho Studio in Eugene, notorious for its reserve of vintage equipment, alongside longtime collaborator/iconic sound-sage Billy Barnett, and mastered by Brad Boatright (Sleep, Beastmilk, Nails) at Audiosiege Engineering, YOB will release Clearing The Path To Ascend on CD and digitally via Neurot Recordings on 1 September, and on vinyl via Relapse Records on 15 September.
Don’t forget that Clearing The Path To Ascend preorder bundles are currently available:
For CD orders: http://neurotrecordings.merchtable.com/pre-orders/pre-order-yob-clearing-the-path-to-ascend-cd#.U9jUSKjY1mBand for special T-shirt bundles: http://neurotrecordings.merchtable.com/pre-orders/pre-order-yob-clearing-the-path-to-ascend-cd-plus-t-shirt-bundle#.U9jUTajY1mB
YOB will bring their riff domination to the UK/Europe with Pallbearer in support, the tour commences on September 3rd, 2014 in Utrecht, the Netherlands. See below for an updated list of tour dates:-
TOUR DATES WITH PALLBEARER IN SUPPORT: