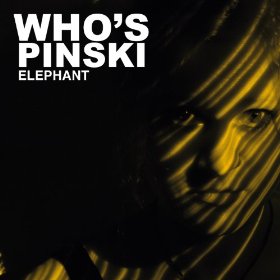 In the midst of new album anticipation, Elephant is Who’s Pinski’s epic EP, a late discovery for the UK market but an intriguing insight into the fascinating progression of this German acoustic/rock band. Hailing from Damo Suzuki’s hometown of Cologne, this female fronted 4 piece are a force not to be reckoned with. In June/July they embarked on a European tour playing prestigious festivals and international sports venues, providing an energetic yet intricate live performance. These cats are certainly on the rise.

Lead vocalist Insa Reichwein is a stand-out performer, wrestling her jumbo acoustic guitars and displaying incredible, soaring vocal ability she comparatively resembles the innocence of Reeta-Leena Vestman from the original line up of Nordic folktronica legends, Husky Rescue to the effortless country twangs of Dolly Parton. Elephant is a real work of art in the sense that it shows a true and honest progression of a bands sound. The first tracks Have You Ever and Telling You portray the inspiring naivety of mixed influence musicians collaborating in a young project, yet displaying distinct elements that prove an undoubted chemistry within the band.

Along with closing track, My Name, the EPs title track Elephant is an unexpected but inspiring contrary. It displays confidence and individuality only found in sporadic composition and creative chemistry. It’s empowering, hauntingly beautiful and a warm, whole-hearted introduction to the bands evolution into establishment. Demonstrating a correlation to Fleetwood Mac and yet again, Husky Rescue, this is an unconventional sound, an innovative incorporation of acoustic tradition with contemporary, charmingly European craft and a much closer representation of the current live experience of this band. Insa quotes: “maybe this is innocence, maybe this is ignorance?” whatever it is, it’s astonishing and a sound that has nurtured and matured. The next release due to hit social media before the autumn is going to be a must hear. Lets just hope they tour it.

The Joy Formidable Share New Single “Into The Blue”