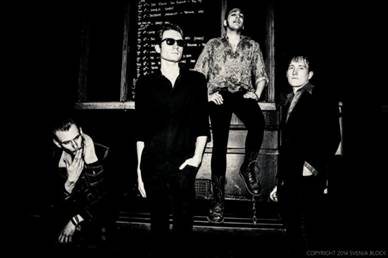 New video for ‘White Light / White Heat’ OUT NOW
‘Palm Zone – Session 1’, a tribute to The Velvet Underground, out soon

Terminal Gods, ‘Disciples of Armageddon’, are joining with new label, Palm Zone Records, for its debut release, ‘Palm Zone – Session 1’. The band, recently described as “dirty, seedy, after-dark music that has you gagging for more”, are joining company with Bonfire Nights andSense Seduction on the label’s launch EP, a Velvet Underground tribute featuring Terminal God’s take of ‘White Light / White Heat’, one of four tracks on the EP.

Paul Carlin, Exec Producer for Palm Zone, says: “This has been something we’ve wanted to do for a number of years and when the opportunity came along to have Terminal Gods join the show, we didn’t hesitate. The three bands on the EP are very different and all add something special. Terminal Gods add dark drums, dank leather and raw energy”.

The Gods based their blueprint of ‘White Light / White Heat’ on Bowie’s Glass Spider arrangement. They’ve suppressed a lot of its slickness and revived its wild side via a hooliganistic chorus and viscous solo.

“Imagine a world in which Andrew Eldritch kept his hair and his leather jacket, and instead of doing crossword puzzles for the last decade, he spent his time cracking skulls in biker bars. Shazam! Terminal Gods”

On stage, Terminal Gods form an imposing line. Like desperate outlaws facing down an angry mob. Backed by a rack of drum-machine hardware and armed with an arsenal of frantically overdriven pop songs, the band stand in a smoke shrouded musical no man’s land. Finding themselves halfway between the uncompromising, raucous hard rock of the 70s, and the cold, new wave beats of 80s, Terminal Gods are a fearsome live band with something to say.

Since forming in 2011 the band have sold out an EP and two 7” singles to an ever growing fanbase desperate for more and they’re riding high after the release of their ecstatically received 12” EP, Machine Beat Messiah. Absolution claimed it to be “the best release of the year”. This is a band passionate about vinyl and the quality of their physical releases with an unrelenting need to write, record and hone their sound that’s rivalled only by their impressive gig record

In their short time together they’ve toured their machine beat, chorus heavy anthems through mainland Europe four times including Norway, Germany, Italy, France and Spain and have kept a considerable following in London selling out the upstairs Garage and The Camden Barfly respectively on the back of their last release.

On top of this they run live music and club nights in and around North London under Heavy Leather Promotions (the label they run out of their living room) and A New Dusk, which started out as a blog and has since escalated into London’s leading minimal and cold wave club night. They’ve even featured in a comic book by illustrating duo Shart Attack, available in comic shops across the country.

Frontman Robert Cowlin’s songwriting craftsmanship deals in the dark imagery and storytelling he acquired growing up fascinated in cult film and literature. With a mixed melting pot of melody, texture and influence, The Gods are classic songwriting personified, with exquisite arrangement and glorious production which harks back to a golden era in British songwriting.

They cite influences from Nick Cave to The Stooges, from The Cult to Automatic era Jesus & Mary Chain, but Terminal Gods are their own runaway freight train of dark, new heavy sounds with a pop sensibility and 2014 sees further European tour plans, an LP to follow, and much more.

For music, news and tour details: