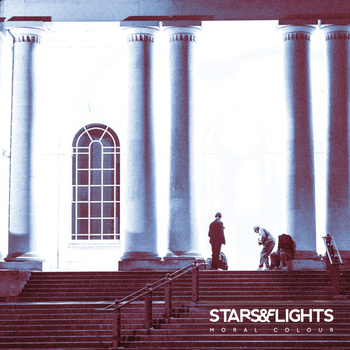 Down a dark, dark motorway, past a dark, dark, pretty-shitty-city stands a small town called Neath – the home of one of the most powerful and impressive bands currently in South Wales. Stars & Flights was born in 2010, a young alt-prog trio with a distinct sound and an aspirational attitude. Off stage these boys have always displayed a welcoming friendliness but their live performance is a daunting experience to any self-respecting musician. Their technical talent is overpowering, combined with their composition-focused work ethic and energetic stage presence, they are flying the flag for alternative Welsh music with a collective sound that could effortlessly blow a 5 piece band off the stage.

Released in June 2014, their new record, Moral Colour is a 10 track example of the creative genius that is Stars & Flights. They have sustained a sound from their early days that has nurtured and evolved into the example you currently hear. There is a clear air of early Biffy Clyro and a strong hint of The Fall of Troy but an established proficiency has replaced their adolescent screamo edge and untamed, raw instrumentation, a feature of their earlier works. They now present a collective sound that is recognizable and unique vaguely paralleling Father Figure or Reuben.

With founding bassist, Kie Tomkins having recently left the band, Guitarist/vocalist, James Davies and drummer, Brad Ratcliffe are on an expected pause. However, any tension or animosity within a band is usually reflected in the music, with an egotistical imbalance dominating the quality of the composition. But Moral Colour shows no signs of this. The trio have an exceptional team work collaboration with the focus being on the overall composition. Every track on this album is written with emotion and craftsmanship and without a hint of hatred, nothing short of what their die-hard fan base expect.

Despite a tenacious American inspiration, Moral Colour reflects a proud British sound that is sadly almost extinct in the UK. There is not even a hint of the false American accent that seems to come naturally to most British hardcore vocalists or the stale beat downs which had been done to death a decade ago. Honest, alternative bands have less of an audience than ever within the UK. European music venues are crying out for international acts with the sheer power and live impact of this band. They would not be out of place on any German, Austrian, Estonian or Scandinavian stage. Europe is calling you, boys. Sort your shit out and get on the road where you will be appreciated.