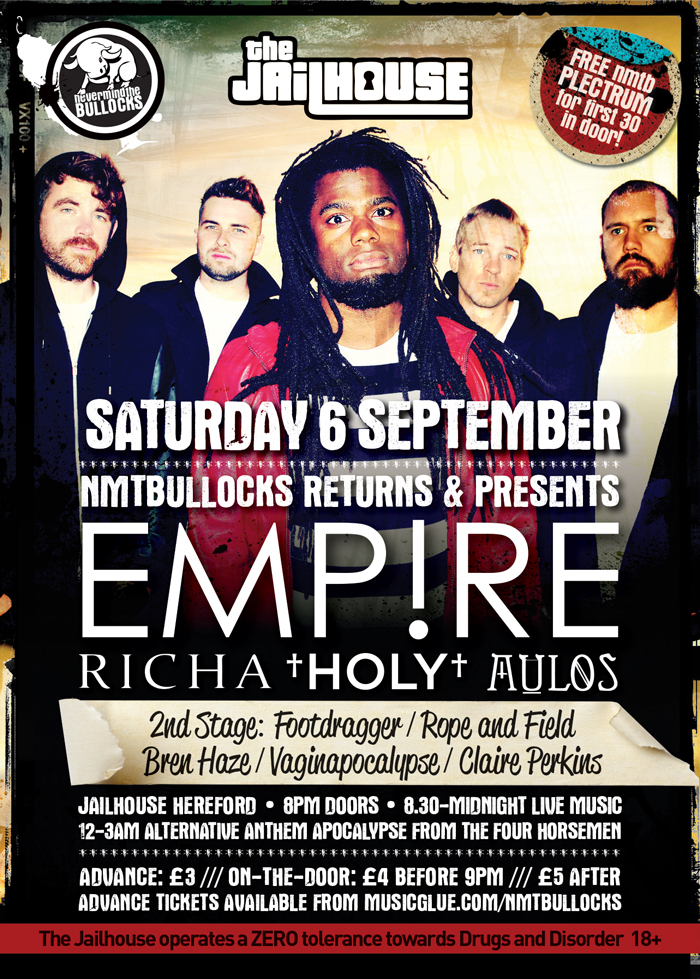 Founded in 2005, NMTBullocks gigs are making a comeback after a three year hiatus on Saturday 6th September with a killer main stage mix of alt rock acts at The Jailhouse.
After a string of impressive 2014 festival appearances including Sonisphere, headliners EMP!RE visit Hereford bringing their killer melodies and virtuosic vocals to town. This sub genre defying band, hailing from the South West has been described by Kerrang! as ‘The best new voice in Rock’. EMP!RE are supported on the main stage by 3 local acts – Richa are an alt rock 4 piece now residing in London and Brighton but who still call Hereford home, Holy epic psych rockers destined for big things from over Worcester way and Aulos an instrumental two piece with Gameboys from Hereford / Bristol.

A second open mic stage has been accepting submissions for over a month now and NMTBullocks are happy to announce that the following local acts will be playing the acoustic stage throughout the evening – Footdragger, Rope and Field, Bren Haze, Vaginapocalypse and Claire Perkins.

Doors are at 8pm and to celebrate the return the first thirty folk through the door will receive a complimentary NMTBullocks glow in the dark plectrum!

After the live music is done around midnight the Phobia DJs, AKA The Four Horsemen bring you a post band alternative anthem apocalypse till 3am close.

Advance tickets: £3 can be purchased using musicglue.com via facebook.com/nmtbullocks
Or pay on the door: £4 before 9pm and £5 thereafter.

Be sure to get your tickets for their return whilst you can https://www.musicglue.com/nmtbullocks/