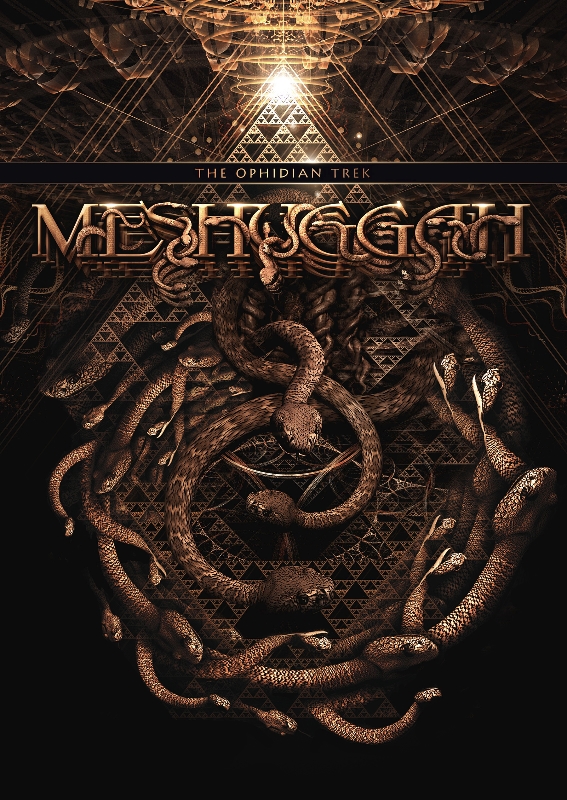 Commemorating the 25-year anniversary since the recording of their first EP, Sweden’s extreme musical deviants MESHUGGAH have announced the artwork and the track listing to their upcoming live DVD / 2-CD release The Ophidian Trek, released 29th September on DVD and also available in Blu-ray.

Drummer Tomas Haake shares the following about the upcoming DVD:
“We’re really stoked about this new Meshuggah live dvd! It’s been 4 years since the release of “Alive” and with the band celebrating 25 years, we felt that we just had to get another one of these puppies out there! Audio/Video was recorded during our European stretch of “ The ophidian trek” tour, as well as at the Wacken open air festival – and we’re super proud of how it came out! For  this one we used the extremely talented photographer Anthony Dubois for filming and editing etc and he’s really done a stunning job with it! Hope you guys dig it and here’s to another 25!!” – Tomas

The Ophidian Trek’s track listings below:

08 – The Hurt That Finds You First

13 – Dancers To A Discordant System

08 – The Hurt That Finds You First

04 – Dancers To A Discordant System

The Ophidian Trek is MESHUGGAH’s second live DVD, the first being 2010’s Alive. Meshuggah’s eighth studio album KOLOSS came out in 2012 and debuted at #17 on the Billboard Top 200 Albums chart, #31 in the World Sales chart, and #48 on the German Media Control chart.

MESHUGGAH’s back-catalogue can be purchased on iTunes & Amazon.

“I Am Colossus,” “Demiurge,” and “Break Those Bones Whose Sinews Gave It Motion” are MESHUGGAH’s latest videos.

There’s no escaping the gravitational pull emanating from www.MESHUGGAH.net.