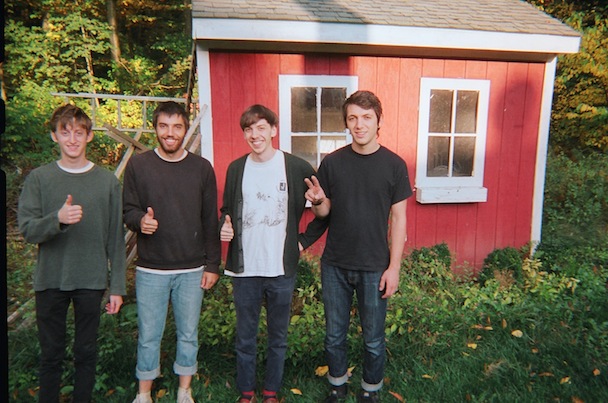 LVL UP have announced their sophomore album Hoodwink’d, the long awaited follow up to their stunning debut, Space Brothers, set for release on September 23rd viaDouble Double Whammy and Exploding In Sound Records on vinyl and digital. Following up last year’s Extra Worlds EP and a split 7″ with Porches., the band are back with fifteen new tracks of indie pop brilliance and fuzzy lo-fi goodness from three distinct songwriters that only add to LVL UP’s undeniable charm.

The band will be heading out on the road in August for a tour with label mate Liam Betson, who just released his latest solo album on Double Double Whammy Records in July to much praise from Pitchfork, Interview Magazine, Stereogum, and others! LVL UP’s Dave Benton and Mike Caridi will also be playing as part of Betson’s backing band, along with Little Big League drummer Ian Dykstra.

Tour Dates (all dates with LVL UP + Liam Betson except where noted):

In October of 2011, 20 year old students Mike Caridi and Dave Benton formed both LVLUP and an independent record label called Double Double Whammy in Purchase, NY. Originally a bedroom recording project of Mike and Dave, LVL UP quickly grew into a five-piece rock and roll band with the addition Nick Corbo (bassist), Greg Rutkin (drummer), and Ben Smith (guitarist). The five saw the cassette release of their first full length, Space Brothers October of 2011, on Benton and Caridi’s new label Double Double Whammy, and on vinyl early in 2012 on Philadelphia label, Evil Weevil Records. While the band laid low for most of 2012 playing only a handful of shows, the album drew modest attention and garnered a small cult following in the Northeast.LVL UP parted ways with Ben Smith in 2012 as he continued his educational endeavors elsewhere. At the end of the year, LVL UP entered the studio to record a new batch of songs titled Extra Worlds, which was released on 7″ via Double Double Whammy. 2013 was a big year for LVL UP, playing almost 100 shows in the year, completing several US tours, and following up Extra Worlds with a split 7″ alongside NYC band, Porches. The band started 2014 on a high note, touring first with Pity Sex (Run For Cover) and thenSaintseneca (ANTI), all while managing the DDW record label from the road, as they prepared for the release of the Frankie Cosmos Zentropy LP.

Almost three years after the release of their first full length, Space Brothers, LVL UPentered the studio several times attempting to complete their sophomore album,Hoodwink’d. Completed in June 2014, Hoodwink’d showcases the evolution of style by the three primary songwriters, Benton, Caridi, and Corbo since the release of their first LP. Drawing influences from 90’s indie rock, 80’s new wave and 70’s power pop, the young boys have created an album that is stylistically diverse yet cohesive. Hoodwink’dwill be released on Exploding in Sound and Double Double Whammy on September 23, 2014.

LVL UP has toured with bands such as Pile, Saintseneca, Big Ups, Ovlov & Little Big League, and shared the stage with bands such as Real Estate, Beach Fossils, Speedy Ortiz, Diarrhea Planet, Hop Along, Bomb the Music Industry, Into It Over It, Japanther and Joyce Manor.