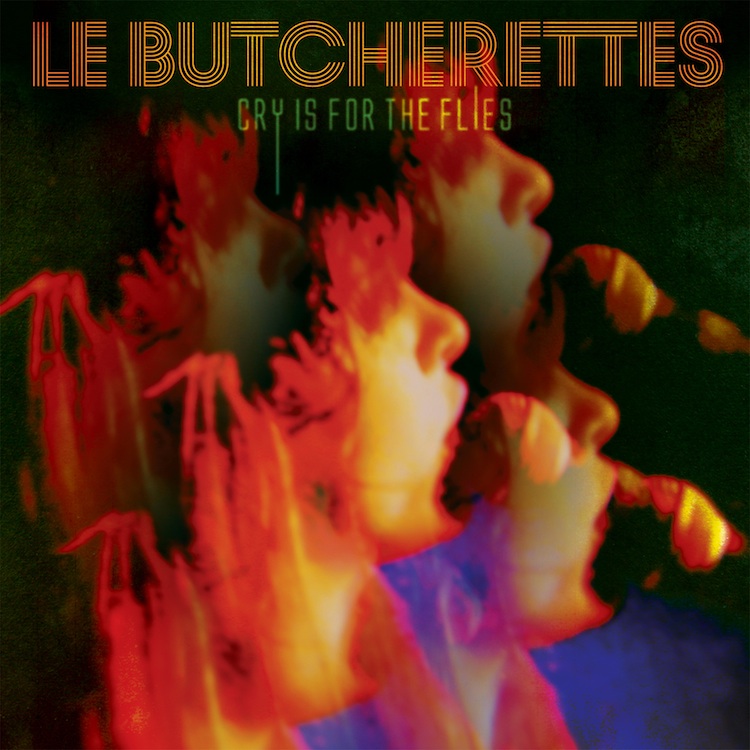 LE BUTCHERETTES JOIN IPECAC RECORDINGS TO RELEASE THEIR NEW ALBUM, CRY IS FOR THE FLIES, TOUR DATES WITH ANTEMASQUE ANNOUNCED THIS OCTOBER

LISTEN TO THEIR ALBUM SAMPLER

In case you missed the recent news, Le Butcherettes have joined Ipecac Recordings’ roster and will release their second album release, Cry Is For The Flies, on Sept. 29 via the label in conjunction with Nadie Sound.

“Since I created Le Butcherettes in Guadalajara, I’ve always yearned for the band to be part of a label/community that helps and supports artists to act fearlessly and help serve the music.” explained fiery Le Butcherettes front-woman Teri Gender Bender. “So happy beyond words that we’ve found a family in Ipecac. Dream come true.“
“We are EXTREMELY excited to be working with Le Butcherettes,” said Ipecac Recordings Co-Owner Greg Werckman. “Teresa is a dynamic front person and a perfect fit with the Ipecac family. Not a band to miss on record or live.“
The eleven-song release had previously been available exclusively as a digital download via producer Omar Rodriguez-Lopez‘s label Nadie Sound’s website but, as of September 29th, will be made available on physical formats (CD/vinyl) as well as through various digital service providers including iTunes.
In a recent interview with the Los Angeles Times, Teri said of the subject matter on Cry Is For The Flies: “There are so many demons I have inside – they’re little gods. There’s a god of evil, the god of good, the god of sex, the god of lust. With music, I tap into those god demons. It’s therapy.“
Cry Is For The Flies was recorded at Infrasonic and Kingsize Studios in Los Angeles. The album features guests Henry Rollins(“Moment of Guilt”) and Shirley Manson (“Shame, You’re All I’ve Got”).  Le Butcherettes is Teri Gender Bender (vocals, guitar, keys) and Lia Braswell (drums). They shall be touring in support of Omar Rodríguez-López and Cedric Bixler-Zavala’s bandAntemasque, here are the dates…
TOUR DATES in support of Antemasque
Thursday, October 02, 2014 – Antwerp, Trix
Friday, October 03, 2014 – Amsterdam, Melkweg
Monday, October 06, 2014 – Berlin, Bi Nuu
Tuesday, October 07, 2014 – Hamburg, Markthalle
Thursday, October 09, 2014 – Zurich, Rote Fabrik
Friday, October 10, 2014 – Yverdon-les-Bains, Amalgame Club
Saturday, October 11, 2014 – Paris, Gaite Lyrique
Monday, October 13, 2014 – Brighton, Concorde 2
Tuesday, October 14, 2014 – Leeds, Brudenell Social Club
Wednesday, October 15, 2014 – London, Electric Ballroom
“And expectations only grew in the wake of openers Le Butcherettes, a feral tour de force and the best opening band this writer’s ever had the pleasure of witnessing live. Magnetic is an understatement when describing frontwoman Teri Gender Bender’s stage presence. Over a well-deserved hour, she flailed, brayed, squealed, and growled her way through her band’s primal neo-Cramps punk attack. It’s a simple backdrop of sturdy AC/DC-ready drums and bass atop which she convulses with such convincing emotion and infectious intensity, she very nearly dares the headliners to top her. Regardless of what else happens tonight the dancing women in the audience already know: Le Butcherettes are never to be missed and are heretofore not to be ignored. Utterly stunning.” – SF WEEKLY