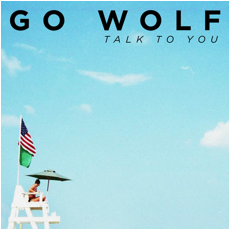 “Their track Voices expresses a freshening juvenile pop touch, which effortlessly hits the target. California’s dreaming without overdoing it, to put it in a nutshell!” – Kitsuné

“There’s not that many bands these days who can do the indie disco thing – that is make songs that appeal to headphones / live settings, who you can also play in an indie club, but Go Wolf have certainly latched on to bigger possibilities.” – Nialler9

“The Kitsuné– alligned band have buzzing, muscular, addictive electro-pop running through their veins and a barrage of tracks which already sound damn glorious and quite gorgeous.” – Irish Times

“It results in a song that comes over like The XX lent some extra bounce and brightness. They look and sound right together.” – Hot Press

Go Wolf met at a random poetry night in a Belfast barber shop, enjoyed each others’ poems and a similar dress sense, got talking, decided to form a band, and quickly became one of the most talked-about new names in the Belfast music scene. Having recently supported the likes of The 1975, CSS and London Grammar, and having been officially signed to … the band have finally decided to release their much anticipated new single called Talk To You.

Talk To You is an infectious artful synth-pop song, which resembles Wild Beasts, Phoenix and The Killersat their best. Catchy and sophisticated vocal lines, rhythmic drum patterns and straight to the point production make it a memorable and accessible blend of all the right ingredients that will stick in one’s mind and make for a perfect sing-along summer track. The pulsing and toothsome arrangement brings creativity, positivity and subtlety into the surface and produces a 3 minute 30 seconds experience of pure fun.

Go Wolf peddle an unlikely variant of 80s synth-pop cut with 21st-century electro-indie edge resulting in a slick yet endearing new single Talk To You which will be available for sale and download 12th August.