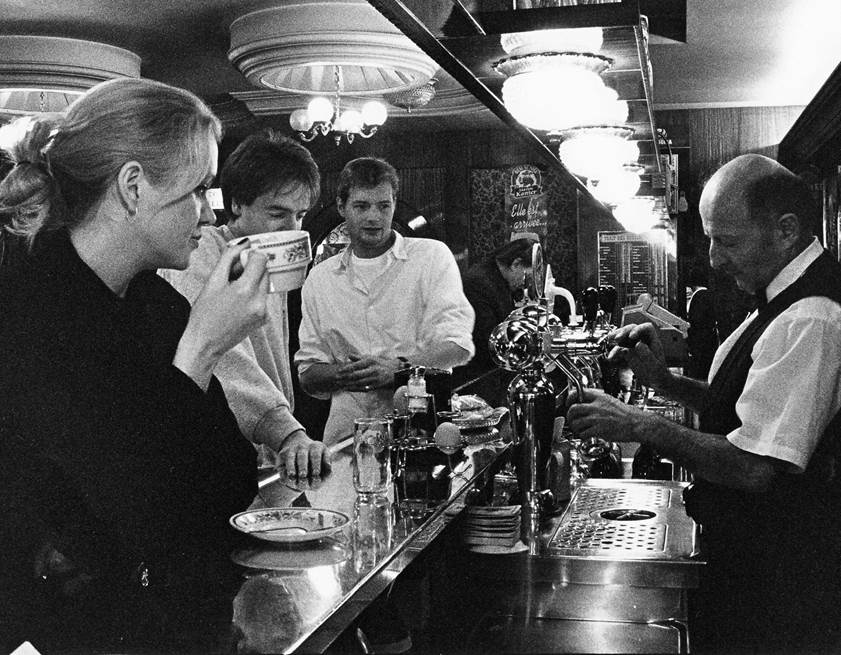 “A wonderful, tangled mess from which you extract what you want: one moment it’s divine and another it’s gnarled and ugly” i-D

“You never know what you’re gonna get next from this lot and I’m all in favour of that” John Peel, BBC Radio 1

Every track lives on its own fully-formed planet; from the panoramic gloaming lullaby ‘Desert Wind’, the agitated  stomp of ‘Excised’, to the celestial reflection of ‘God Willing’ and onwards ‘R.O.C’ is an eventful aural ride across changing landscapes and terrain, from rough to smooth.

Surprises come at every corner, with ‘Hey You Chick’ offering a more ebullient and lusty mood over growling bass, bouncy beats and wah wah. If The Field didn’t hear ‘Balloon’ growing up, he should check it out asap, as they nail the ever-evolving, skywards climbing sound with confidence and panache.

Every piece is a highlight, and despite their bricolage approach, tracks sound engrossing, arranged, fully-formed and far more than mere sonic tinkering.

The dubbed-out experimental echoes  of  ‘Gold Bug’ and the prism-like ambience into space R.O.Ck of  ‘Ascension’ contrast brilliantly with ’Dear Nicky’ and ‘Clouds’, which demonstrate their deft and at times camouflaged knack for songwriting, whilst ‘Plastic Jesus’ is a characteristically leftfield cover choice – of the song performed by Paul Newman in ‘Cool Hand Luke’.

For writers of a certain vintage ‘R.O.C’ will mark the welcome return of a best kept secret, and for a new generation of scribes and fans alike, R.O.C will wow. It has stood the test of time, sounding freshly inspirational – standing up against its peers’ records from back then and recent releases in equal measures.

Other three albums and fourteen singles/EPs, from “God Willing” (1993) and ‘Girl With A Crooked Eye’ (1994), to 2006’s ‘Night Fold Around Me’, R.O.C have delighted and confounded fans and critics, ignoring musical boundaries to create what has been variously called “the sound of paranoia”, “toxic euphoria”, plus “startling, beautiful and addictive”.

R.O.C have been labelled “perverse” and “uncategorisable”. Rather than rehearse the cliches of a selected genre (like some of their contemporaries), they view the whole of pop (and beyond) as theirs to play with. They started out making tapes from lined-up cassette-players, dictaphones, drum-machines, guitars and keyboards. Dance beats flowed into R.O.Ck ‘n’ roll, through spoken word, pop melodies and into electronic/industrial noise. With sampling technology emerging as they made their first releases, R.O.C were unlikely to restrict themselves.

And while some assumed R.O.C were just mischievous, others felt they were reflecting something more complex:

“Be young, be British, parade some sickly indie variant of pop around the shop, watch your so-called career rise in times of chest-beating patriotism and then dip sharply when people come to their senses; alternatively take the R.O.C route and visit a Britain that is a more paranoid place than the Albion of their peers. R.O.C examine the true youth stories of our time: the long-term effects of hedonism, atomised, uncertain urban lives, boredom.” (NME 1996).

R.O.C began in the late 80s as a loose collective revolving around Fred and Patrick (who had met at school), recording on various floors around London, swapping available instruments and gadgets. An early version of the group played a festival in Warsaw (in communist Poland) in 1987. By their debut single ‘Dead Step’ (1993) R.O.C was Fred and Patrick plus Karen Sheridan (a Glasgow native whose family emigrated to Colorado when she was a child), Russell Warby, and Peter Burgess who recorded R.O.C’s first five singles/EPs in his Brixton studio.

Early singles displayed a tendency to black humour. “Girl With A Crooked Eye” is a story of domestic violence on the Costa Del Sol, and ‘X-ine’ (1994) contains the line “I hope you both get Aids”. But the widely praised debut album ‘R.O.C’ (Setanta Records 1996) revealed more personal, exposed material: forlorn breakup songs, screaming rants and self-loathing. But they weren’t above upbeat pop (‘Hey You Chick!’), dreamy instrumentals and spoken word. Plus all manner of sound effects, phone messages, taped conversations, fragments of TV and radio; ‘Excised’ starts with a secret recording of a friend’s wedding. ‘R.O.C’ was co-produced with Danton Supple (Coldplay, Morrissey), who continued to work with R.O.C on their subsequent albums.

Branded pranksters by some music professionals, R.O.C’s story is one of committed perseverance. They gained a ‘difficult’ reputation when their label wrote an open letter to the London music industry warning people against working with them. Despite (or because) of this and the critical response to ‘R.O.C’, the group signed to Virgin/EMI in 1996 and released a second album, ‘Virgin’ in 1997. The album was so-titled after the label agreed that the artwork would simply be the famous Virgin logo printed full size across the front, an undertaking broken at the last minute on grounds that “retailers would think they were advertising Virgin shops”.

David Stubbs wrote (in Uncut magazine): “Virgin, their label, would like to see them as a commercially viable pop band. R.O.C see themselves as sometime revolutionary sonic kamikazes who make night raids on your preconceptions – and a commercially viable pop band. What are R.O.C? “Virgin” delights in posing more questions than answers. lf you heard their single, ‘Cheryl”, last spring, a prim and presentable piece of backtracking electro-pop, you’ll be all the more astonished by “Dada”, the opener here. Sampling heavily from Barbet Schroeder’s famous 1974 documentary about Ugandan dictator ldi Amin, including his chilling, stentorian chuckle when he is reminded by the interviewer of remarks he made in praise of Hitler, it’s a screaming, rhythmic firestorm. lf you heard their recent single, “(Dis)count Us In”, with its intoxicating, loping Hawaiian guitar loop shot through with a stream-of-consciousness narrative, you’ll be pleasingly puzzled by “Mountain”, Karen Sheridan’s beautiful balladic lament, as shattered as Big Star’s “Kangaroo”. R.O.C are capable of anything, and demonstrate as much – sadly, this sort of approach is considered commercially unviable; it screws up the corporate sales pitch when the artist won’t sit still. Still, if the prospect of a decentred, pillar-to-post ride through the postmodern gamut doesn’t give you a nosebleed, then you and R.O.C deserve each other.”

Much as ‘Virgin’ built on R.O.C’s ‘perverse’ reputation with its Idi Amin samples (and on ‘Sedwotised’ a mass of cutups from Jerry Springer-type US TV), the album is interspersed with raw heartfelt moments. NME said: “‘Ocean and England’ will melt you into a shimmering puddle”. Q magazine said: “it ends with a love song – now that is unsettling.”

‘Virgin’ built on its predecessor with more positive reviews. Single releases ‘Cheryl’, ‘(Dis)Count Us In’, and also ‘Hey You Chick’ (licensed from the first album) each scored Single of the Week in UK music papers NME or Melody Maker. Plaudits also came from such diverse quarters as Radiohead, Orbital, and Dannii Minogue, guest-reviewing “(Dis)Count Us In” for Melody Maker: “this is very relaxed. It’s really chilled out. I like things which are kind of hypnotic and this has got the groove, hasn’t it? And it’s immediate too. Fantastic.”

But while R.O.C were enjoying the recognition, Virgin’s executives were at war. R.O.C’s A&R man left the company, and the group lasted another year on the label before being dropped while recording a third album in 1999.

Career-wisdom suggested R.O.C were finished. But not being careerists, R.O.C continued, belatedly touring the UK (with Sneaker Pimps) and self-releasing the single ‘Soviva’ (1999), first demoed for Virgin. NME said: “We like this because of its politely restrained sense of anger and bitterness.” Time Out magazine said: “(R.O.C) return with a slow-building, twisted treasure that pumps a New-Order bassline, lush strings and a disturbingly cracked vocal into The Clash’s “Lost In The Supermarket” and comes up trumps. Again.”

In 2002 R.O.C issued a 12″ of ‘I Want You I Need You I Miss You’ (from the first album) as remixed by long-time collaborator and DJ Nicky Holt (aka Solah). The single drew warm responses from club DJs, among them Richard Norris (The Grid) plus Chris Carter and became a summer favourite at Cream in Ibiza.

In 2004 R.O.C they were back in the studio (completing the album begun at Virgin) with long-standing collaborators Danton Supple and Gareth Huw Davies at the desk. ‘Night Fold Around Me’ was completed in Spring 2005.

A single, “Princess”, was BBC 6music’s Evening Single of the Week in July 2005. Also In 2005, R.O.C joined forces with new electronic label 12 Apostles to release a follow-up single ‘Journey to the Centre of Brixton’.

In 2006 R.O.C’s third album “Night Fold Around Me” was released by 12 Apostles. Q magazine said: “In the mid-’90s, R.O.C, like Underworld, tapped into an interesting dance/guitar hybrid. Urban paranoia and moody melody is what they do best…artistically the trio remained an intriguing fringe concern, and this belated third album sees that continuing.”