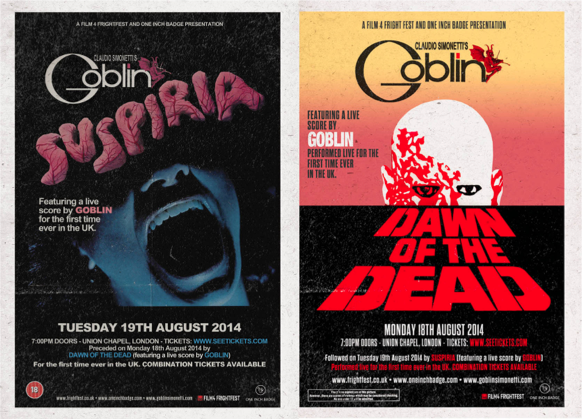 CLAUDIO SIMONETTI LIVE IN CONVERSATION AS PART OF FILM4 FRIGHTFEST, TWO DAY HORROR FILM AND GOBLIN LIVE SCORE EXTRAVAGANZA
In association with this year’s Film4 FrightFest, Italian progressive rock legends Goblin are to perform two rare and unique events in London that will showcase their thrilling original movie soundtracks for the well-known cult-classic horror movies Dawn Of The Dead and Suspiria.
Claudio Simonetti shall also appear on stage, in conversation with Paul McEvoy as a precursor to the main performances on both nights.
Suspiria has now sold out, but there are still some tickets remaining for Dawn Of The Dead so make sure you grab tickets nowto avoid total disappointment!
Headed by Brazilian-born Italian composer Claudio Simonetti, the four-piece group will perform alongside the films in real-time as both movies playback from start to finish, offering a completely new and exciting perception of these classic soundtracks and films, never experienced before.  This will be the first time ever that the show has been performed in the UK, following critical acclaim and sell-out shows in Australia, USA, New Zealand, Canada and Italy.
The shows will take place at the architectural treasure and award winning venue Union Chapel in North London on the 18th and 19th of August.
Dawn of the Dead (Zombi in Italy – 1978) by George A. Romero and Suspiria (1977) by Dario Argento are among the most famous soundtracks composed and produced by Goblin.
Night 1: DAWN OF THE DEAD (With a live re-scoring by GOBLIN) – THE UK PREMIERE
Union Chapel, London 18+
7:00pm doors Monday 18th August 2014
TICKETS / http://www.seetickets.com/event/dawn-of-the-dead-ft-live-score- by-goblin-/union-chapel/799240
Night 2: SUSPIRIA (with a live score by GOBLIN)
Union Chapel, London 18+
7:00pm doors Tuesday 19th August 2014
SOLD OUT