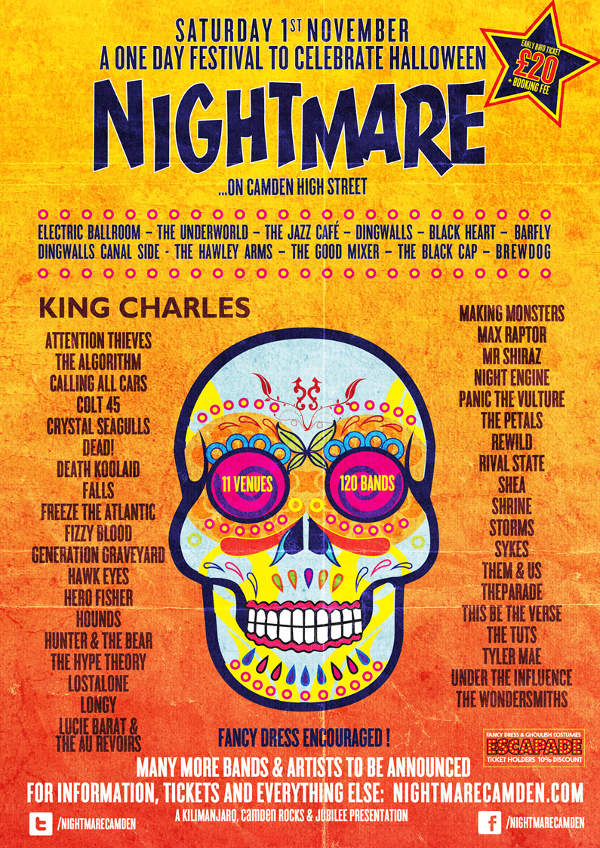 Kilimanjaro, Camden Rocks and Jubilee are proud to announce Nightmare Festival, a gloriously rock n’roll one day festival set to honour the horror of Halloween like it has never been celebrated before! The terror and nightmares will begin on November 1st, Halloween weekend and the Day Of The Dead, and will feature a host of cutting edge rock, indie, metal and punk bands taking over various venues in London’s most rock n’roll Camden Town. Fancy dress is will be VERY much encouraged so be as horrific as you possibly can be!

“Camden goes mad for Halloween,” explains event organiser Chris McCormack. “People really get into the spirit of it. We recently sold over 7000 tickets for our sister event Camden Rocks in May and imagined how much fun it would be if we got everybody, including the bands, to dress up and party the day and night at the biggest Halloween party London has ever seen!

“It’s also a great chance to check out the cross section of great new bands coming out of the UK at the moment,” continues Chris and there are already many bands confirmed, some already firm favourites with many others waiting to be discovered.

Joining UK rock favourites such as Hawk Eyes, LostAlone and Max Raptor will also be West London singer-songwriter King Charles who states “I am very pleased to be playing Nightmare Festival. When bands are playing in every venue, on every corner, the whole place is alive and anything can happen!”

The line-up so far includes:

Early bird tickets available now for £20 plus booking fee from the link below.
www.nightmarecamden.com

Bands will be playing in the following venues, with more to be added: