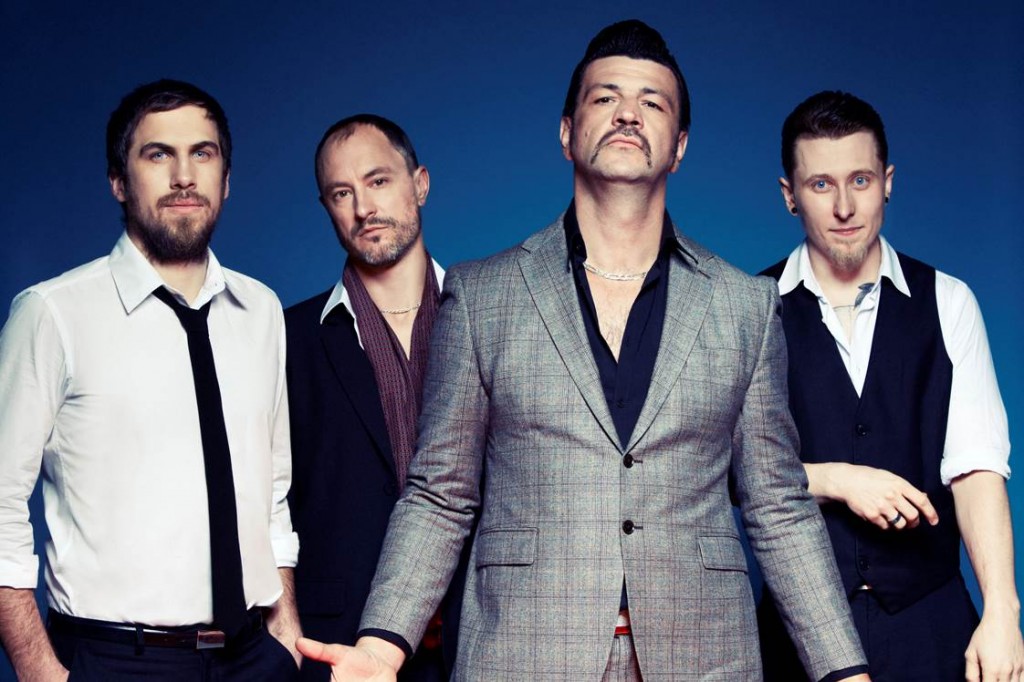 A small cellar in a smart building. A carefully curated collection of analogic synthesisers. A pot of Brylcreem on a table. ZZ Top and Muddy Waters vinyl sitting in a corner in front of a gleaming guitar and an old amplifier. Ladies and gentlemen, welcome to Arnaud Rebotini’s lair in Montmartre, Paris.

A hulk of a man, Rebotini may look physically impressive but inside he’s really a big softy who loves singing the blues and has an almost carnal attachment to his keyboards and vintage drum machines. His musical career is divided between two projects: one uses his own name, Arnaud Rebotini, releasing instrumental electronic albums, both nostalgic and futurist, that he plays live on stage – alone – surrounded by his favourite machines. The other is Black Strobe, where he sings and plays a steamy mix of rock and electronic music heavily influenced by blues and country ‘n’ western. The project comes to life fully on stage with the energy of a four-person group.

On October 6th, Black Strobe will release their second album, Godforsaken Roads. The record confirms Rebotini’s rock sensibility and debt to the great American tradition of songwriting, with songs touching on the classic themes of the blues – the randomness of life, the very weight of existence and the strong emotions that run just below the surface (love, lust, loneliness…). He plunges into this world of the bayou, prison and the devil with real passion and the voice of crooner often compared to Iggy Pop or Nick Cave.

Godforsaken Roads contains ten new tracks, including the latest singles Going Back Home and Broken Phone Blues. The digital edition adds Boogie In Zero Gravity and The Girl From The Bayou released as singles in 2012. On the album, Rebotini also reappropriates Folsom Prison Blues, a Johnny Cash classic, once again with the aim of keeping the blues/country ‘n’ western flame alive (the group’s first album already contained a cover version of Bo Diddley’s famous track I’m A Man). This new version, entirely synth-led with not a guitar in sight, transports the song to another space-time continuum with swathes of keyboard worthy of Tangerine Dream, perfectly resuming the spirit of Black Strobe in 2014.

However, don’t think that Godforsaken Roads is all retro – in fact it’s bang up to date, using electronics, sometimes even of a disco slant, to give Black Strobe its futurist dimension. The album allows Arnaud Rebotini to capture the spirit of America’s cowboy era and transport it to the present day with resolutely modern production, much like the spirit of the blues that seeps from the music of electro-pop idols Depeche Mode.

With this new album, layered and feverish, the group is back with renewed faith in the power of the blues and a passion for motivating beats.

5 – For Those Who Came on Earth Thru The Devil Asshole