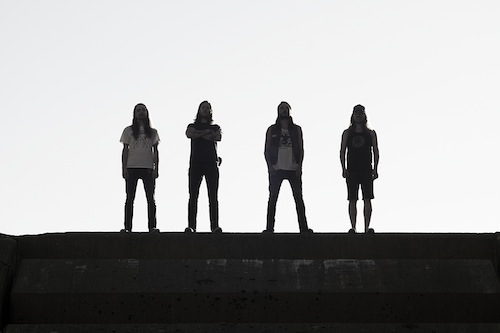 Vancouver’s Baptists share the first new track from their upcoming second album, Bloodmines, which is due for release via Southern Lord on 13th October.

Arriving at the album’s mid point, ‘Harm Induction’ is a volatile, high speed, turbo-charged rager. As the guitar riffs scale to an ear-splitting climax, the vocals also reach the peak of absolute seething anger. Harm Induction is unrelenting, near suffocating, and highly cathartic.

LISTEN TO THE EXPLOSIVE TRACK, AS BAPTISTS REACH BOILING POINT ON ‘HARM INDUCTION’

Not ones to rest on their laurels, Baptists have found new ways to express their rage and with Bloodmines they have created a memorable and commanding album. Check out the cover art designed by Jillian Mann and track list below.

TRACK LIST:
1. Chamber
2. Wanting
3. String Up
4. Closed Ports
5. Vistas
6. Harm Induction
7. Festered
8. Dissembler
9. Bloodmines
10. Calling
11. For Profit
Don’t forget you can still watch the Baptists Rain City session, recorded in their hometown recently, here you can sample some of the ferocious new songs http://youtu.be/d-BujK1z6U4. Baptists are part of the incredible billing for Southwest Terror Fest in Arizona which takes place in October. They are also embarking on a Southern Lord package tour of the West Coast US and Canada with Torch Runner and Obliterations.
AUTUMN LIVE SHOWS