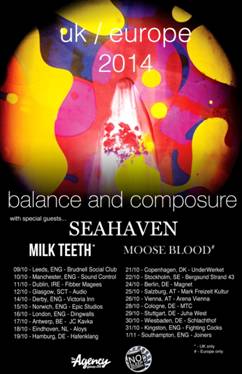 ANNOUNCE SUPPORT ACTS FOR UK AND EUROPEAN TOUR FOR 2014

Praise for ‘The Things We Think We’re Missing’

“The ‘Things…’ grabs you by the neck, pulls you in and never lets you go” – Big Cheese

Having announced a UK and European tour back in May this year, Balance and Composure today announce Seahaven, Milk Teeth and Moose Blood will be joining them on the road. With Californian post-rock outfit Seahaven joining them for their entire run of shows, UK’s Milk Teeth will take their blend of punk and grunge on the UK leg of shows, with Moose Blood supporting the band on the European run of dates, playing tracks from their forthcoming album ‘I’ll keep You in Mind, From Time to Time’.

These dates will mark Balance and Composure’s first tour in the UK since 2012. Having last year releasing the acclaimed ‘The Things We Think We’re Missing’ through Hassle Records, with  a 10/10 from Big Cheese magazine and a 9/10 in Rock Sound. Balance and Composure finished 2014 with Big Cheese naming them Best New International Band in their annual round up and making it into Rock Sound magazines top 10 albums of the year.