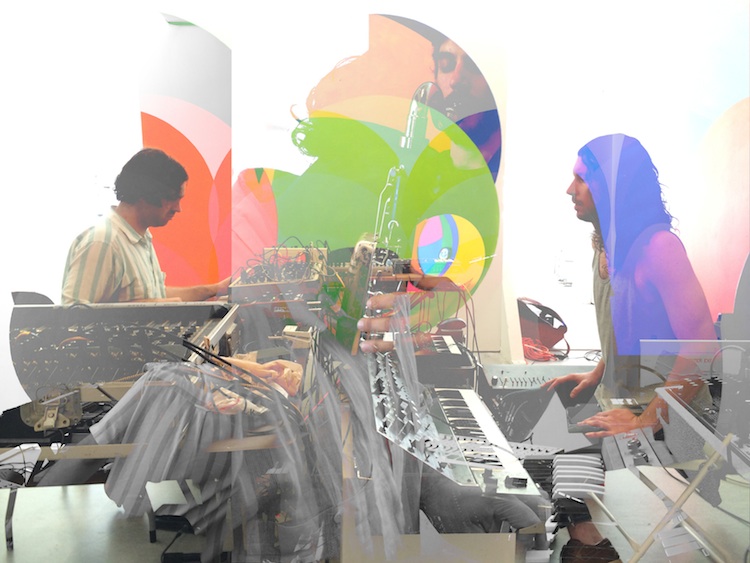 Bitchin Bajas’ self-titled new album is something delicate yet definite, gradually washing over your consciousness. Something pure and natural is happening-within the sound, within the song; in the album and in you. The shifts that come, make changes in your moods and your body temperature. On one hand, it is in many ways the ultimate album; and on the other, barely even an album at all. Where these ideas meet is immediately realised in the come-to-life video for the song, “Bueu”

Using analog, modular video synthesizers, the video for “Bueu” was created by Nick Ciontea and is the first in a series of videos planned for each and every movement on the Bajas’ self-titled new album. The rest are set for a special, digital-only release of the album, available exclusively from Drag City. Tune in and drop out and watch 12 minutes of trippy visualisations.

Avoid the static of everyday life and tune in to your relaxed state with Bitchin Bajas’ “Bueu!”

Bitchin Bajas are touring the US and Europe, here are the dates:

Read on for more info about the album…

Bitchin Bajas have been around the world in five years; chasing sonics through space and time and drawing a lot of conclusions along their discographical path. Always, they push forward, recklessly consuming processes in order to realise their own works—but the sound and the music regularly emerges with tranquil essence, bringing them and their listeners into a shared experience. Bitchin Bajas’ output has been remarkably diverse in search of this singular goal, which makes for great listening across multiple releases and with the release of this new double-LP, they have mapped and traversed their own ecosystem as they journey in search of the aural epiphany, the true unknowing.

With plenty of room stretched over four sides, Bitchin Bajas use their many methods to attain perfect flow throughout the 76 minutes of this self-titled record. Self-titled because this is who they are at their core; these are the flares and oscillations of their soul. They will be other things again, horizons will continue to rise and fade away in their path as they continue forward and upward—but this self-titled record is a pure vision at the heart of Bitchin Bajas. Acoustic is the beginning. Eastern tonalities relocate Bitchin Bajas farther inside the source, finding the timeless point from long ago and slowly sliding via fader until then is now, until acoustic goes analog. What began in randomness, pitch-shifting and tape manipulation emerged in the cutting as a single direction, a journey in scales, divided by the format perfectly into four stages, eight discreet parts. Bitchin Bajas reach high and low in their consciousness as expressed through equalisation to see (hear) what affect it will have on them—and what it does to them, reaches through to the listener too.

The space found on Bitchin Bajas was located with organ, synthesizer, winds, xylophone and autoharp, employing a 1″ 8-track tape machine to the fullest extent. Additional contributions from strings, keys, guitar and field recordings helped make Bitchin Bajas everything that it is.