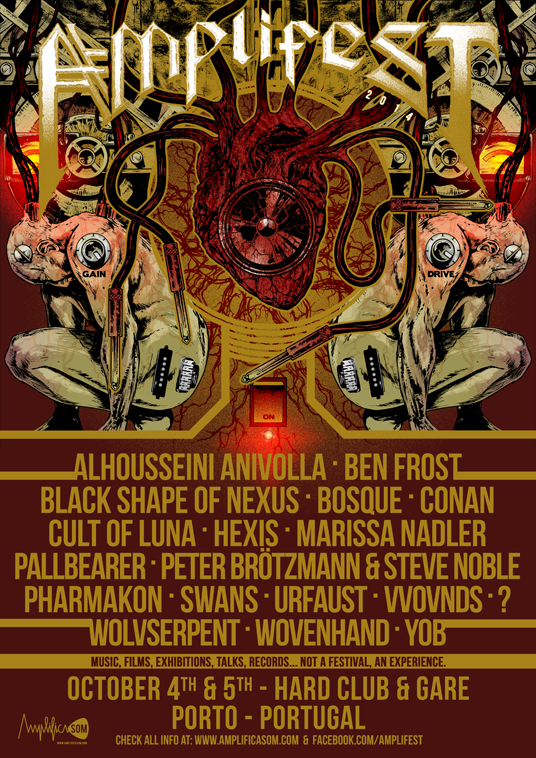 “Amplifest has been a fantastic ride since its inception in 2011. In the three past editions, we’ve had the pleasure of sharing many unforgettable moments with all of you who joined us: Godflesh in one of the first shows since their reunion; the long awaited return to our country of Godspeed You! Black Emperor; the first time in Portugal of bands like Amenra, Bohren & Der Club of Gore, Ufomammut, Chelsea Wolfe, Jesu and many more, all of them giving all their energy to stun the audience; the art exhibitions at Hard Club; the engaging Amplitalks at O Meu Mercedes; the bonding between artists and audience in between shows…”

“…these are just a few examples – if you have been here before, we’re sure you have your own highlights and special memories. If you haven’t, well, this will be the year. Amplifest will be back in 2014 in the weekend of 4 and 5 of October, taking place in the city of Porto, which was recently elected as European’s Best Destination. This will be Amplifest’s most ambitious edition to date: expect a challenging and eclectic lineup, expect an event from and to music lovers. This will be an edition with a lot of heart so let’s keep riding together – the path is upwards. Thank you for joining us.”
LINE-UP (in alphabetical order)
ALHOUSSEINI ANIVOLLA
BEN FROST
BLACK SHAPE OF NEXUS
BOSQUE
CHELSEA WOLFE: LONE
CONAN
CULT OF LUNA
DAVID D’ANDREA
HEXIS
MARCH OF THE GODS: BOTSWANA METALHEADS
MARISSA NADLER
PALLBEARER
PETER BRÖTZMANN & STEVE NOBLE
PHARMAKON
SWANS
TERMINAL TOWER
URFAUST
VVOVNDS
?
WOLVSERPENT
WOVENHAND
YOB
For more info on the line-up, venues, accommodation deals, Porto, etc please visit: http://amplificasom.com/amplifest/2014/
“Two days of music, two days of intense emotions, various memorable and unforgettable
experiences. Amplifest is without a doubt one of those rarest of events where you feel like you are at home. See you soon, Amplifest 2014.”
– CVLT NATION
“A fabulous two days” – ROCK A ROLLA“This is not just a music festival, and surely it isn’t a hipster festival for whiskered guys – it’s a real, deep, and cultural experience. Unfortunately, there are not many left.” – DROME MAGAZINE

“In the third edition, Amplifest becomes the new candidate to occupy a place of honour among the major European musical events dedicated to promoting underground culture, alongside Supersonic or Roadburn.” – STAF MAGAZINE

“Amplifest is one of the best festivals in Europe right now.” – SLAM MAGAZINE

“The highlight of the Portuguese cultural programming, not only because the exemplary manner of Amplificasom’s work ethic (the promoter of this finest music festival) but also for the undeniably love that is shown for the art in every concert they have been organizing since 2006. Amplificasom has proved their value through out an incredible and priceless experience. Now we just have to wait for 2014 because chances are: we will be there, once again!” – GHOST CULT