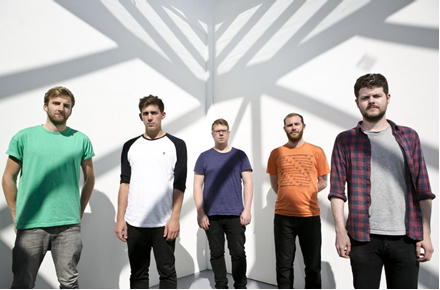 We Were Promised Jetpacks will release their highly-anticipated third album, Unravelling this Autumn via FatCat Records. It’s unquestionably their best and most assured album to date, which is likely to propel the band into the upper echelons of renown and success.

We Were Promised Jetpacks also just announced an extensive UK & Ireland tour this Autumn in support of Unravelling:

In 2009 Adam Thompson (Vocals / Guitar), Darren Lackie (Drums), Sean Smith (bass) and Michael Palmer (Guitar) were a band of nineteen year old University Students, bunked up together in a tenement flat in the West End of Glasgow, Scotland.

On signing to Fat Cat Records later the same year, the band could not have anticipated the journey they were about to embark on. Now, five years later, We Were Promised Jetpacks are ready to release their third studio album Unravelling.

We Were Promised Jetpacks debut album These Four Walls was released in 2009 to critical acclaim. Thus began the bands busy touring schedule, playing high profile festival slots around the UK and USA supporting labelmates Frightened Rabbit and The Twilight Sad. In 2010 the band released a follow­-up EP The Last Place You’ll Look, comprising of unreleased tracks and swelling, orchestrally­ inspired rewrites of songs from their debut album These Four Walls.

The bands sophomore release followed in 2011 and was recorded at Sigur Ros’s Sundlaugin Studios in Iceland. In the Pit of the Stomach was testament to the poise, control and vigour the band had learned to command. The extensive touring schedule continued and the release received support and high praise from the likes of Rolling Stone and SPIN.

During the 2012 US Tour the band recorded and captured footage from their live set at Philadelphia’s Union Transfer. Early 2014 saw the release of E Rey: Live in Philadelphia, in ode to Esteban Rey the bands’ friend and then tour manager. The album captures the explosive energy and drama fans have come to expect from a We Were Promised Jetpacks show, with behind the scenes footage allowing fans a unique insight to life on the road with the band.

Early 2014 saw the band working tirelessly on Unravelling which will be the bands most confident and accomplished record to date. Recorded in Glasgow at the infamous Chem19 Studios with Paul Savage who has previously worked with numerous established and diverse Scottish acts such as Teenage Fanclub, King Creosote, The Twilight Sad, Franz Ferdinand andMogwai.

Lead vocalist Adam Thompson says, “It was a fairly straightforward decision to work with Paul. He has done plenty of brilliant work and we had worked with him for a few days before recording our first album and always remembered enjoying recording with him. I’m really chuffed with that decision. I think Paul has done a great job and its the first time we’ve ever been present to mix the album with the same person who has recorded it, which has been an enjoyable and much more relaxing experience for us.”

The impending album release also sees the addition of a new member to the band in the form of multi-instrumentalist Stuart McGachan. Thompson’s explains “Stuart is an accomplished keys, piano and guitar player as well as having a lovely little singing voice and with him we have tried to do something a little different with this selection of songs. We’ve known him for ages and played music with him before so we were pretty sure it would work out. It has just been the four of us since about April 2004 so having someone new with us has been an enjoyable part of the process.”