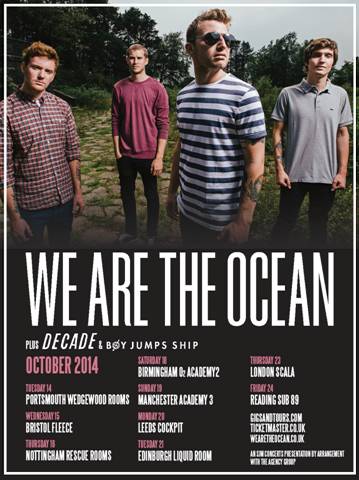 After the success of 2012’s ‘Maybe Today, Maybe Tomorrow,’ which saw We Are The Ocean storming the BBC Radio 1 playlist, with an addition to the A list for their track ‘Young Heart’, the Essex quartet now prepare to release new music and play their first full UK headline tour since they brought a UK run to a stunning climax at London’s Koko 15 months ago. We are the Ocean today announce that joining them on tour are Kerrang ‘Best British Newcomer’ award nominated Decade along with Newcastle foursome, Boy Jumps Ship.

Tickets for shows go on sale this Friday 11th April 2014, and will see WATO showcase new music alongside the raft of hits from their previous three albums. Alfie Scully, lead guitarist, says of the announcement “We’re so excited to announce that we’re heading out on the road again, touring has always been a huge part of what we’re about as a band. We always aim to make every one of our shows something to be remembered and this tour will be no exception to that”

“….the start of something very special.” – Kerrang!

“…more confident, more fluid and more powerful than We Are The Ocean have ever sounded before.” – Rock Sound