Watch the new video for
Reigning Sound’s ‘Never Coming Home’
Shattered is out now on Merge.

Shattered is Reigning Sound’s first album for Merge and the first full LP by the group since 2009’s Love and Curses.

The band’s principal songwriter/member, Greg Cartwright, has been leading the shifting cast of characters since 2001.  This particular embodiment of the band includes longtime keyboardist Dave Amels, who joined the band seven years ago when Reigning Sound recorded an album, consisting mostly of Cartwright’s songs, with former Shangri-Las lead singer Mary Weiss.

Dave proved to be key in putting together the current line-up.  Three years ago, Greg was asked to make a promotional EP for Scion.  Recordings were set to take place in Nashville where he had lined up two local friends to round out the band, but as fate would have it, both had to bow out at the last minute. Luckily, Mike Catanese, Benny Trokan, and Mikey Post—Dave Amels’ bandmates in Brooklyn soul group The Jay Vons—were up for the task. The four flew to Nashville, learned the songs, and recorded them with Greg in a couple of days. They have been touring and playing together ever since, and Shattered proves that the musical union is both exciting and consistent for fans of Cartwright’s songwriting.

Listen to the Dylan-esque vocals on their first single,
‘Falling Rain’ HERE

The album was recorded at Daptone’s Brooklyn studio  and masterfully engineered by Wayne Douglas. The recordings are warm and punchy, a mixed bag of rockers, ballads, and something in between.

Shattered is out now on Merge Records 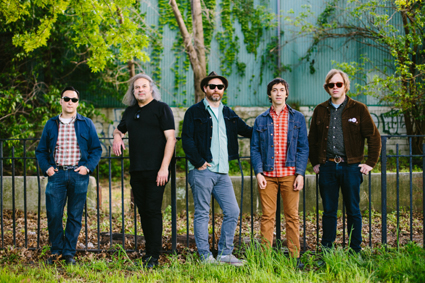