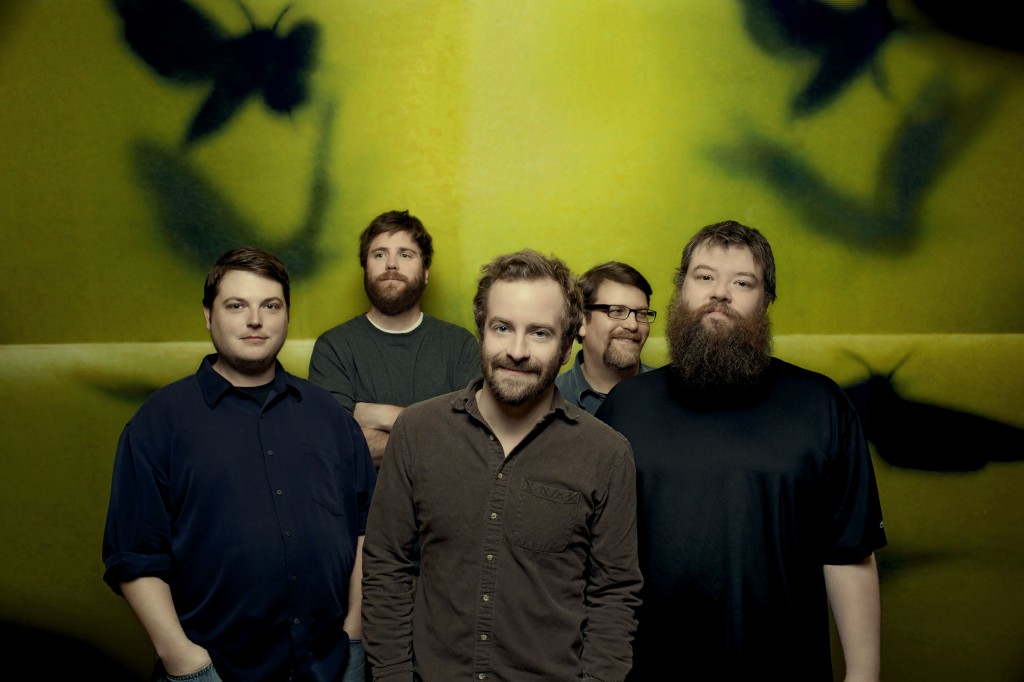 “Sophisticated and inventive arrangements that place them at the forefront of the genre.” – Paste
“Lyrics are filled with poignant observations and philosophical musings.” – American Songwriter
“These Turtles could be flippin’ marvellous.” – Independent

Wild Animals, the highly anticipated new album from acclaimed Trampled by Turtles, will be released worldwide on July 29 through Thirty Tigers. The new record was produced by the lead singer-songwriter of Low, Alan Sparhawk, and recorded in the legendary Pachyderm Studio in Cannon Falls, MN (Nirvana, Andrew Bird, The Jayhawks). In support of the album, the band have announced a five-date headline tour for November 2014. Commencing at The Thekla in Bristol on November 16, the dates includes a return to London’s Scala on November 20, following a triumphant sold-out show during the summer of last year.

Of the new music Dave Simonett (guitar, vocals) notes, “We all tried to come into this thing extremely open-minded. How can we sound new to ourselves? I feel like the sound has changed and is changing, especially from Palomino to now. A lot of our reputation from even just a couple years ago was that we were this fast band, which we can do, and we do that. But this record focused a little bit more on other aspects of our playing together.”
Wild Animals follows 2012’s Stars and Satellites, which garnered widespread praise—the album debuted Top 30 on the Billboard chart and the band performed on “The Late Show with David Letterman,” “Conan,” “The Late Late Show with Craig Ferguson” and “A Prairie Home Companion.” Trampled by Turtles’ massive touring schedule have kept them busy since then with various sold out runs and prime slots at festivals including Lollapalooza, Bonnaroo, Austin City Limits Festival, Outside Lands, Sasquatch! Music Festival, Firefly Festival and Newport Folk Festival.

Formed in Duluth, MN in 2003, Trampled by Turtles is Simonett, Tim Saxhaug (bass, vocals), Dave Carroll (banjo, vocals), Erik Berry and Ryan Young (fiddle).  Within the contained music scene of Duluth, the members of the band did their own time in punk and rock bands brandishing their electricity proudly before switching to acoustic instruments. While they never set out to be a bluegrass band, Trampled by Turtles employs many of the same traditional techniques of the genre, but their differences in influences and attack make for their unique sound. After spending years refining their live show and building fans via word of mouth, they released their debut Palomino to little fanfare out of the gates. The story quickly built and eventually the record spent over a year straight on the Billboard Heatseakers Chart.

Trampled by Turtles are expected to announce UK shows for the autumn shortly. In the US, the band have revealed their first annual Festival Palomino launching September 20 at Canterbury Park just outside of Minneapolis. Each act was selected by the band—the confirmed performers include The Head and the Heart, Low, Charles Bradley & His Extraordinaires, Hurray for the Riff Raff, Field Report, Apache Relay, Erik Koskinen, plus more to come. The band has also confirmed nationwide headline dates to support the new release including a nearly sold out Red Rock Amphitheater appearance.