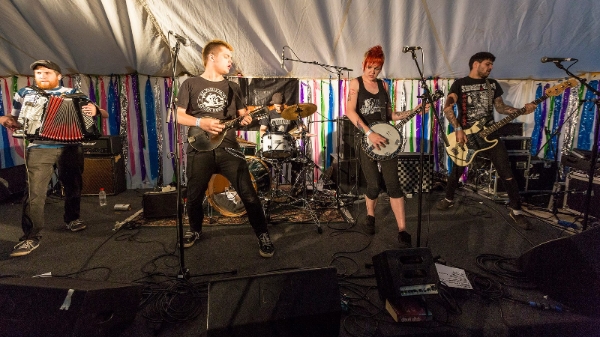 Manchester Folk-Punks, The Roughneck Riot are currently recording their new album whilst planning to hit the road until the end of 2014

The Roughneck Riot are currently hauled up at Jaraf House Studios, Wigan UK, putting the finishing touches to their new album. After suffering a couple of member changes on Drums and Accordion, the writing process for the record took a few steps backwards. After pulling through and perfecting the tracks, the band hit the studio to lay the tracks down for a new release, planned for late 2014.

“The past 2 years have been quite ridiculous in the UK. We’ve been mostly writing when something has made us angry. There’s a disgusting amount of fascism and racism in the UK and Europe. Some more personal tales of our own lives and Sam (accordion player) has even rewritten an old song about Fox Hunting to be a tribute to the Hunt Saboteurs of the UK” says vocalist, Matty Humphries.

The Roughneck Riot will be hitting the road until the end of 2014:

Pick up the latest offering “This Is Our Day” from The Roughneck Riot through Bomber Music here: http://bit.ly/theroughneckriot