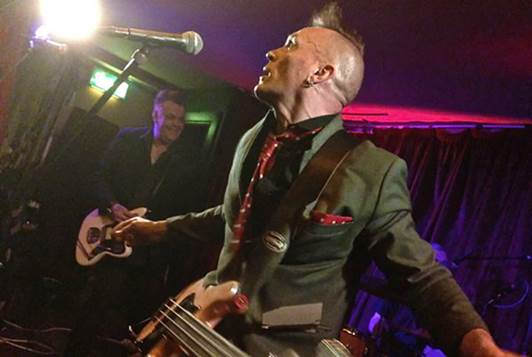 Play one of the UK’s highest gig at the top of   Blackpool Tower, August 8th

The Membranes are pleased to announce a very special gig date, set to take place at the top of Blackpool Tower on August 8th, and is not only the bands, but the UK’s highest ever gig at 158 meters above ground level.

This very special show will see the band revealing material from their upcoming album. The gig will be held on the glass observation platform at the top of Blackpool Tower. A fitting location with stunning views over the bands hometown, and the center focus of an upcoming documentary about the unique group, due for broadcast in the autumn.

The Membranes first album in 25 years, Dark Matter, is due for release October 27th via Cherry Red Records. A melting pot of post punk, psychedelic rock, noise and drone, also harboring neo classical pieces, the album is an aural adventure all about the universe, tangled with an autobiographical tale of life and death.

The band claim the album is “not a rock n roll project, but a high decibel orchestra playing discordant death disco symphonies about life and the universe and beyond. With music that varies from classic Membranes discordant noise, to drone rock epics, to neo classical orchestrated pieces to psych outs, to a walk on the dark side exercise in post punk with dark dub exercises…”

A brief history of The Membranes:

The Membranes were a key UK underground band in the 1980s. They pondered the death to the traditional rock sound that formed the bedrock of the noisier end of C86, as well as being a key influence on Big Black and the noise of the emerging US underground.

When they moved to Manchester they rehearsed next door to the, then, just formed Stone Roses. After striking up a friendship with the ‘Roses, they were told by Mercury Rev, Lambchop and many other American underground bands that their music was an unlikely yet key influence on them, due to the long and chaotic tours of the USA The Membranes played when signed to Homestead records.

The band, who reformed to play ATP festival at the request of My Bloody Valentine and then Shellac, are planning a summer of festivals and other ‘activities’ before they release their first album for 25 years this October.