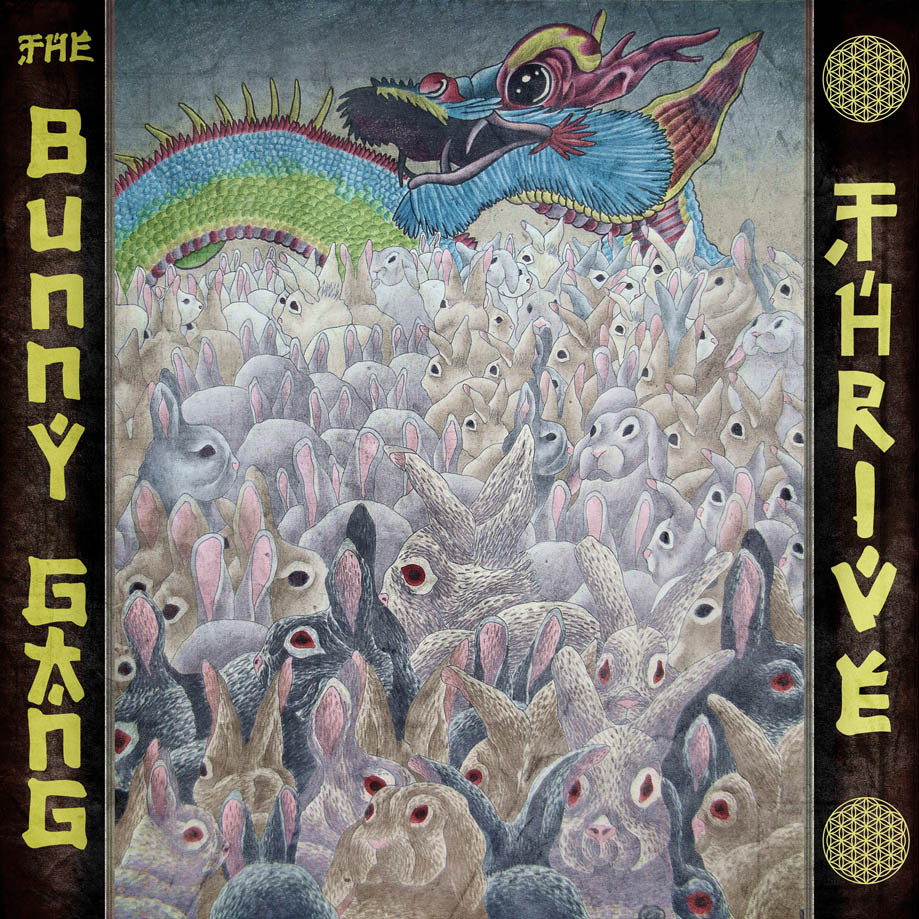 The Bunny Gang’s sophomore record, Thrive will be released on September 23 via Hardline Entertainment.

The band, which is fronted by Flogging Molly’s Nathen Maxwell, plays music that crosses the lines of rock, punk and reggae.

A track off the album, “Sirens Through The City”, is available as a FREE download on Hardline Entertainment’s most recent label compilation.

About The Bunny Gang:

Nathen Maxwell has the word Revolution tattooed prominently on his left wrist. However, It’s more than just a word for The Bunny Gang frontman and Flogging Molly bassist.

“It’s a sign of what time it is,” he affirms. “Revolution must be peaceful, nonviolent, and conscious. I think it can mean something different to everybody though. There can be a million interpretations, and that’s the wonderful thing about it.”

In order to stir up the eleven songs comprising the album, the gang retreated to Sonic Ranch Studios in El Paso, TX with producer Ryan Hewitt [Sheryl Crow, The Avett Brothers]. Tapping into an indescribable chemistry, the entire offering was cut in less than a week.

“The name comes from a punk rock crew I grew up with in the South Bay of Los Angeles called The Original Bunny Gang or OBG PUNX. After playing with several great musicians, including my father Maxwell and my first ever bandmate Mike Peralta, in 2012, I met an amazing hearted and like- minded human being in Nat Lort-Nelson. He was the glue. There’s a deep history, and we share a philosophical outlook. We believe art should say something.”
That’s exactly what songs like the first single, “Sirens Through City,” do. Co-written with Scott Abels (Jimmy Cliff, The Aggrolites, Tim Armstrong & numerous other acclaimed artists) the song skates from a soulful riff into a poetic melody, it’s a personal and poignant rumination from the singer. He also encloses a hopeful message inside of the track.

“I wrote that song when I was living in Harbor City, which is a rough town in South Los Angeles,” he recalls. “I was literally sitting on the corner and hearing police sirens every night. At the same time, it’s a song of hope and making it out of the ghetto and thriving. If people could dream bigger and step outside of their bubble, they’d realize the world is a beautiful place.”

Elsewhere on the record, the energetic “Uprise Underground” appeals to revolutionaries everywhere, urging an awakening, while questioning the status quo. The Bunny Gang then floats down the river on “Illegal Market” co-written with Dennis Casey (Flogging Molly). This is an iridescent jam that showcases the bands love of Cumbia as well as a cry for social equality.

Ultimately, anybody who takes this ride with The Bunny Gang will feel that progression. “Life, art, and music are all evolution,” he concludes. It sounds like revolution is just up ahead for The Bunny Gang.

Founded by Ken Seaton, Hardline Entertainment is a Hermosa Beach-based record label and artist management company featuring some of the best up and coming bands in the West Coast alternative music scenes. Hardline proudly supports DIY ethics and has maintained this core principle while exposing new music to listeners without depending on major label support. Hardline is the home of AllurA, Authority Zero, Hoist the Colors, Nations Afire, Neo Geo, Versus the World, and many more. For more information visitwww.HardlineEnt.com and www.facebook.com/HardlineEntertainment.