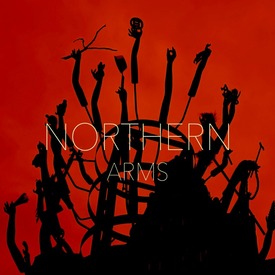 Stream the Self-Titled Debut on PopMatters HERE
Watch the video for the single “Below the Pines” courtesy of BULLETT MEDIA HERE
“If ever there was a Philadelphia answer to Arcade Fire or Nick Cave and the Bad Seeds, Northern Arms seems to be it with their cavernous, dark art rock that comes complete with a horn section ” – WXPN

Northern Arms combines a haunting atmosphere that draws comparisons to Black Heart Procession and The Handsome Family with the casual tension of Roxy Music and solo Eno. To celebrate the release, Northern Arms are streaming the record in its entirety over at Pop Matters, and have also partnered with Shilpa Ray for two shows this week in Brooklyn and Philadelphia. See below for a full list of dates.

From the irresistible noir anthem “What You’ve Got On” to the album’s closing track, the hymn-like “Flesh of Arms”, Northern Arms is a bewitching statement punctuated with grandly poetic lyrics. Employing a lush three piece horn-section, epic arrangements, evocative melodies and astounding poignancy, each song stands independently as a portrait of a time in a man’s life as the album depicts a restless narrative of loss, dissipation, remorse and redemption.

05. Let the Water Come Down