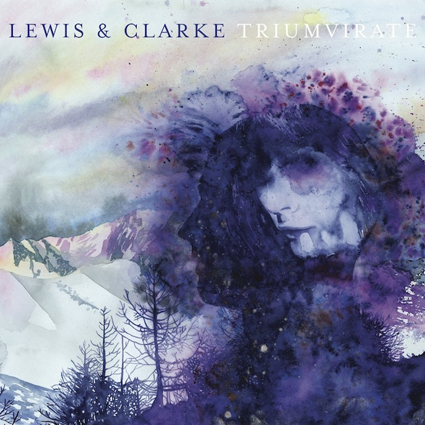 September 8th, 2014 marks the release of Triumvirate, Pennsylvania-based artist Lou Rogai’s finest work to date and the first new Lewis & Clarke album in nearly half a decade.   Rogai may not have released any records as Lewis & Clarke since 2009′sLight Time EP, but having previously worked with the likes of Bat For Lashes’ Natasha Khan and Strand Of Oaks’ Timothy Showalter, Rogai has not been dormant during his time away from the spotlight.

Triumvirate is a 75-minute double-LP of seasoned confidence and meditative song-craft with a vision of clarity and conviction; a journey through lush and brooding passages nestled in a canopy of strings, melancholic melodies and warm, world-weary beauty. Complex, fragile arrangements mix with unexpected but natural elements to create a tapestry of delicate, intricate avant-folk / art-pop.

It may seem counter-intuitive for a person who makes his living through music to distance himself from his city of birth/nearby creative hub of Brooklyn, but for Lou Rogai, the breadth and dexterity of his work under the moniker Lewis & Clarke would have been impossible to achieve by urban means alone. Starting in 2003 with the self-released Bright Light EP, it is obvious that his surroundings have played as intrinsic a role in the project as any instrument. His geographical influences are entwined in lyrical imagery and metaphor, inspiring cascading, light-speckled atmospheres with intricate, wind-swept rhythms.

The debut Lewis & Clarke full-length Bare Bones and Branches and its follow ups, Blasts of Holy Birth and the Light Time EP (released on La Société Expéditionnaire, the label founded by Rogai in 2006), are immersed in seasonal themes, existential prose, and the cycles of life’s changes.

Triumvirate exists in the shadows between elegance and stark dissonance, shifting focus between light and dark while examining the beauty of impossible situations.  Lyrically rich and musically gorgeous, Triumvirate is well worth the wait.

Stereogum recently hosted the premiere of A Map Of A Maze.  A short film by director Kevin Haus and cinematographer Dan Papa.  It’s a thirteen minute window into the meditations, environments, and inspirations of the forthcoming Triumvirate LP.

Press for previous albums:
“Lewis & Clarke blew up their pastoral folk sound into long, torn-open and moody soundscapes on 2007’s Blasts of Holy Birth, and they have taken that brooding tangled beauty down even darker roads….Light Time shows once again that Lewis & Clarke’s quiet sound is an affecting one.”  Prefix

“Lewis & Clarke doesn’t play songs as much as unfurl them, slowly letting ribbons of sound billow and cascade. The power, though, is palpable, made even stronger through delicateness, a paradox that is at play not only in the music on Light Time but also in its metaphors for life, loss and renewal.”   PopMatters

Hypnotic mountain folk, setting reedy vocals against spare and elegant guitars, gradually swooning into a near seven-minute piece full of strings and woodsy imagery…songs for getting lost into.”  Stereogum

“Its obvious that this album is a keeper…perfectly crafted, well executed, and earnest in its intent. In aiming to create music that is emotionally pure, Lewis & Clarke has released one of the best of the year.”  Prefix

“The melodies are exquisite, as delivered by an impressive array of strings, percussion, and Rogai’s own direct, unforced vocals…This is a band that more than deserves its growing acclaim.”
Pop Matters

“A profound work of earthy, orchestrated new-folk, Blasts Of Holy Birth raises the bar for both listeners and players…An expose of grace, beauty, peril, triumph, and the interconnectivity of all things. Meshing gorgeously hushed melodies and plucked guitars with baroque string arrangements and ethereal pulses and surges, Lewis & Clarke has crafted a transcendent work of epic proportions.”  Impose