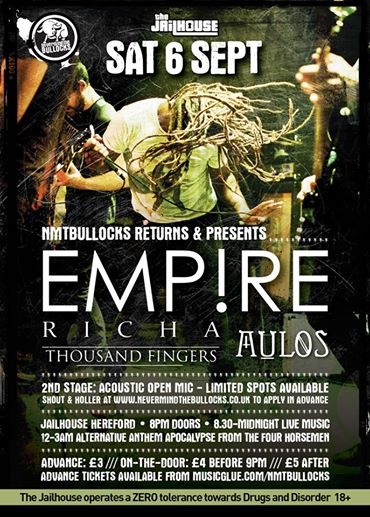 Over the past few years Hereford’s live scene has had it’s ups and downs but what has always remained in the community is music loving driven individuals who do their best to introduce and showcase talent in their hometown. To say now that Hereford is lacking music is a lie, with more hardworking promoters, teams and venues backing the scene. These individuals are working hard pushing local and national talent to our venues making sure these acts are to be both heard and seen live in Hereford.

Local promoters Never Mind The Bullocks are set to return to the live local scene following a 3 year hiatus . We are very pleased to re-introduce you to one of our favourite and much loved promoters. NMTB are set to return with a powerful line up of Empire, Richa, Thousand Fingers and Aulos live at The Jailhouse September 6th. We’ve been extremely lucky to chat to the man behind NMTB to find out more about their return and their forthcoming Hereford show.

Firstly thank you for your time.  If you could introduce yourself and your relationship with Never Mind The Bullocks

Was doing a lot of local gig photography, about 10 years ago. Helped to meet a lot of local bands, and gigs began through that.
The name – was a quick Hereford pun to call the first event. It seems to have stuck.
I soon started travelling to venues in places like Bristol, Brum and Cardiff to take pics of their local scene and touring acts – if I saw an act I liked I’d ask them to play Hereford.

What does NMTB mean to you?

I just love doing it. Finding the acts, the promoting, the night itself, good feeling if it’s been a good one for all involved. On the flip side can be stressful and frustrating at times, but that’s no reason not to do it. I’m a fairly quiet, shy sort and NMTB is something that forces me to come out of my shell, get out and about and meet all sorts of great folk which on a personal level is a real positive thing.

For years you kept the Hereford live scene going with show after show bringing fresh talent to the Jailhouse- whats the process in finding the right headline act?

I don’t know about kept it going, there were many other promoters and bands putting on their own shows. For me it’s changed over the years. Started local so knew all the acts. When I started travelling to venues in places like Bristol, Brum and Cardiff to take pics of their local scene / touring acts if I saw an act I liked I’d ask them to play Hereford, so near the start, yeah had usually seen acts live myself before bringing them here. Showing age but myspace was a great place to scour for unsigned acts for a while. Have always loved finding and listening to new bands and music long before ever considered putting on gigs and nothing’s changed, am always interested in that. Nowadays, with a family, it’s more listening to new music radio shows, podcasts, nationally and different regions, reading lots, making lists, many a list – then start enquiring about the acts I like and hope others would like to see, till something falls into place, which can take a while.

You’ve always heavily supported local bands, giving acts the opportunity to feature  on the bill for an unmissable line-up, given acts their first ever live show and somewhat bettering their career. Why is local so important to you?

I’s never really occurred to me that local shouldn’t be important. Whether a local scene thrives or struggles depends on the musical community that lives there. If there’s an abundance of local talent and a decent amount of gigs going on for them to play at then it encourages audiences and inspires other bands to form and join in, which is beneficial for all and should be promoted as much as possible. If local acts aren’t encouraged however, and for example young acts aren’t given reasonable opportunities to play to their peers then I think the scene suffers, instruments are put down and forgotten about, talent is wasted.

How does it feel knowing that several local acts will forever be grateful for giving them a chance?

Which are the most memorable shows that you’ve put on?

Loads of good memories from the beginning and those initial local shows. Martini Henry Rifles, Mobsters, Big Bang, Kid Carpet and loads more sharing the stage with local acts though those Herdsman years, right through to starting at the Jailhouse, and tidy nights with acts like The Computers and Tek-One visiting. The best and most memorable there was probably the first night of a LMHR bullocksfest. Ghost of a Thousand played, who I was a real fan of and who together with lots of acts, touring and local had a blast playing to a busy club over 2 stages. Was risky but somehow it all came together, was really chuffed.

One of the worst – the sunday of that same fest was a complete washout, just didn’t work, pushed it too far and felt real bad for everyone else involved on that particular day. That’s how it goes though – promoting = unpredictable.

As have said, everything really – the hunt for new acts, designing the promo, trying to get word out to as many folks as possible, the whole build up and if it all goes off without a hitch and all had a good night then it’s a great feeling.

Before you had some time away from shows you expanded the NMTB nights into Hay-on-Wye, for an array of live nights at The Globe. How did this partnership come about?

I just asked them and we sorted it as I wanted to have a go at expanding. It wasn’t just Hay, tried heading out to Birmingham, Gloucester and Worcester at the same time too. All very complex and foolhardy. Spread myself way too thin, a little success at the start in Hay and really enjoyed the run of shows put on at the Firefly in worcester, but Birmingham and Gloucester were pretty disastrous, the Birmingham launch had to be cancelled before it had even begun because of just plain bad luck, too long and complex a story to go into here. All in all was a struggle and more than a bit foolish to try and do so much, so quickly. I then got married and had happy news baby on the way, so made fairly easy decision at the time to call quits on promoting, at least for a while.

How did you find the reception to the artists you booked in previous years?

On the whole well received I think, a few not so much, but mostly those were I think when had too much on plate and just made the wrong call in haste to book a show.

Following 3 years on hiatus, you’ve confirmed your return show at The Jailhouse, September 6th- what made you kick NMTB back into action?

Lots of reasons, mainly – because I just plain missed it. Work and family life are at a point where I can afford to spend some free time time putting on the odd show here and there, just need to be sensible about it. I get to be out and about doing something I love to do and Hereford gets a couple of extra gigs, hopefully everyone’s a winner.

What can we look forward to from the evening featuring EMPIRE, Richa, Aulos and Thousand Fingers?

Heard Empire, so impressed with Joe Green’s vocals, band musically great too, was an easy booking to make, I know they’ll be great and mix genres to a point where I hope they’ll appeal to a fairly wide audience. Strong local support from the other bands too, Richa right up my street with their tunes and have always had a soft spot for Aulos.

What have you really missed about promoting and hosting live shows?

Everything I’ve mentioned, meeting great people, the hunt for new bands, satisfaction of putting on a decent show and giving folk a good time.

Is there anything new from NMTB that you are excited to promote/ or anything that makes the well overdue return stand out?

There’s a 2nd open mic acoustic stage at the return. Five x 15-20 minute slots up for grabs. As only 5 slots anyone interested should apply in advance by 16 August via nevermindthebullocks.co.uk or message facebook.com/nmtbullocks should be a good place for acts to come and have a go.
Oh and might be a few giveaways for folks getting in early on the night. Nothing too fancy just something nice, simple and personal to nmtb.

If artists wanted to get involved for forthcoming shows whats the best way to go about contacting yourself and getting heard?

Via the nevemindthebullocks.co.uk website. Email, FB and twitter links on there. Bio is cool, but be honest with it. Have some music can link to in your message. I will listen and give as many local acts as possible who want to play a chance to.

I’ve also pic up the camera again – Will be around at lots of local shows taking gig pics, another love of mine and a great way to see/hear new acts live and in person.

What else can we look forward to from NMTB?

More shows, not as regular as before but every couple months there’ll be a nmtbullocks gig you might like to stick in your diary.

Sat Nov 29, Jailhouse – have just confirmed headliner already and am stoked with the booking too, one of my favourite new bands have found this year and one I hope will go down a storm here in Hereford. Can’t say who for now, but will be shouting about it come September time.

Good opportunity to thank all who’ve helped out or played a Bullocks gig in the past, and thanks in advance to anyone getting involved in the future.

Be sure to get your tickets for their return whilst you can https://www.musicglue.com/nmtbullocks/ 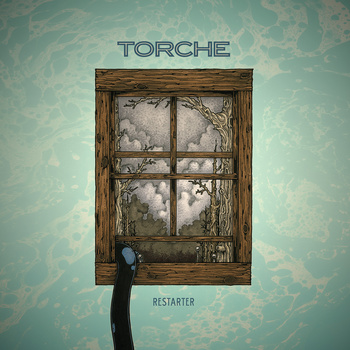