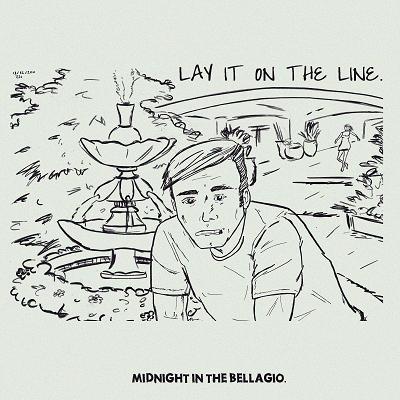 LAY IT ON THE LINE

“What a Victorian hardcore crew would sound like…unsettling and ominous” – Rock Sound
“A perfect example of how hardcore should be” – Punktastic
“Menace, grit and ferocity – doing hardcore right” – AbsolutePunk

London hardcore four-piece Lay It On The Line are to re-release a brand new version of their 2012 demo, Midnight In The Bellagio. The ten song affair was originally release in 2012 by Aaahh!! Real Records on tape and to date has notched up well over 12,000 downloads.

Now, with producer Luke Yates (of Crazy Arm and The Human Project) at the helm to rework the tracks that the band originally mixed at home on their stereo, the London punks are giving the record the official release they feel it always deserved.

The original cassette tape demo was highly praised despite the poor production and saw Mike Davies at the BBC Radio 1 Punk Show play two of the tracks from it before the band had even played a show. Approached completely from scratch, all ten tracks sound infinitely larger and better demonstrate Lay It On The Line’s unique brand of intense hardcore and more ambient, melodic moments.

The rest of the band’s output is currently available at http://layitontheline.bandcamp.com/album/the-first-two-eps.