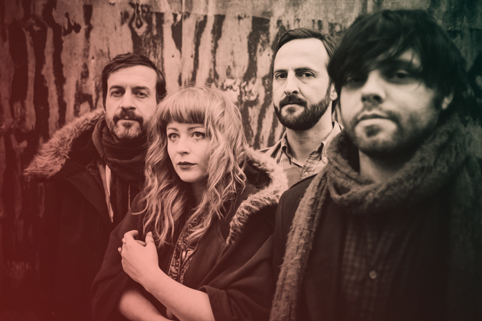 “Their Music is a dreamy, droney rejuvenation of the 90’s Thames Valley Sound that reveres Chapterhouse’s ‘Whirlpool.'”  Uncut.

“The breathy vocals of Alison Garner are draped elegantly over walls of distorted guitars…”  The Times“Just beneath the foggy surface is a knack for diminutive hooks and delightfully catchy guitar licks ..Lights poignantly highlights the genre’s inherently despondent atmospherics, lacing them with the hopeful, resounding call to arms of eager melody making.”  The Line of Best Fit

“… an album full of romance and yearning, hope and heartache, lust and shame.”  Louder Than War

In December 2013, Bristol shoe-gazing band, The Fauns released their second album, Lights on Invada Records.  The album received a slew of great reviews including 4/5 in The Times and the lead single, ‘In Flames’ was playlisted on BBC 6Music.

This month Invada will be re-releasing their self-titled debut album.  The Fauns was originally released on their own Laser Ghost label in 2009.  With no promotional muscle they picked up radio support from BBC 6Music’s Steve Lamacq and shifted over five thousand copies of their debut record purely by word of mouth.  The CD has been out of print for two years – and this new version comes as a deluxe digipack containing a bonus disc of remixes from the likes of Clint Mansell, Loop’s Robert Hampson and Invada label boss, Redg Weeks, amongst others.

Listen to the Clint Mansell remix of ‘Fragile’ HERE

Their debut album will be released on Invada on CD on 28th July 2014.  To coincide with this release, the band will headline The Social (5 Little Portland Street, London) onWednesday 23rd July.