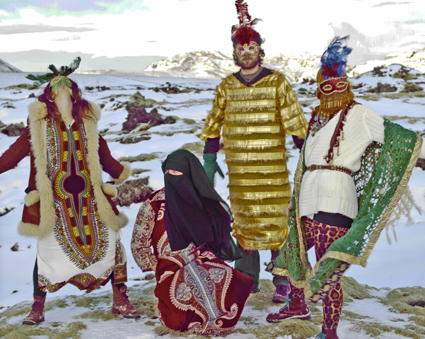 You can now listen to the lead single, ‘Hide From the Sun’, which Stereogum calls, “beautifully psychedelic…[their music] crosses borders at will and speaks its own language.”

Listen to ‘Hide From The Sun’ on Stereogum HERE

Commune is the follow-up to GOAT’s hypnotic 2012 debut, World Music, which received widespread acclaim and placed in many top-ten lists. The mysterious, masked group continued to awe the world with their intense live shows which was captured on their Live Ballroom Ritual double-album.

GOAT will be presenting new songs from Commune on festival stages throughout the summer before embarking on their first full European tour which finishes with a massive show at London’s Roundhouse.

Commune is available to preorder now on LP/CD/DL. You will receive an immediate download of ‘Hide from the Sun’ when you pre-order.
Pre-order link: www.rocketrecordings.com/goatcommuneRocket also have some limited bundle offers when you purchase an ultra-limited Gold Vinyl LP that comes with a 7″ featuring a non-album track plus ‘exclusive to the Rocket release’ – a remix of ‘Hide from the Sun’ by psych wizard, Al Lover.  Also available as part of the bundles are five colour print posters and limited edition t-shirts.

More on GOAT:
There is no direct association between mysterious Swedish psychedelicists GOAT and revered Argentinian master of magical realism, Jorge Luis Borges. Yet their mission appears to be the same. Borges generated his ideas from historical curiosities across the globe—gaucho knife duels on the South American plains, Middle Eastern heresiarchs plotting treacheries in secret libraries, Chinese pirates waging wars against the Emperor—and twisted them into fictions that blurred the lines between fortified footnotes and outright fantasy.  GOAT’s sound is the sonic manifestation of this principle, as evidenced in their aptly-named debut album, World Music, which incorporated elements of Nigerian afrobeat, German krautrock, Anatolian funk, and a host of other global micro-niches into a hallucinatory cultish celebration of rock’s diverse manifestations. Deprived of the requisite band biography, early experiencers World Music’s electrified tribalism and lysergic compositions had the inevitable questions regarding the origin and timeframe of the recordings. The truth only became knottier every time the elusive GOAT collective provided their cryptic answers.

Ultimately, it is GOAT’s music that speaks the most about them, and, on their sophomore album, Commune, GOAT deliver a heavy dose of acidic grooves, hypnotic incantations, and serpentine guitar lines.

Commune tracklisting:
1. Talk to God
2. Words
3. The Light Within
4. To Travel the Path Unknown
5. Goatchild
6. Goatslaves
7. Hide From the Sun
8. Bondye
9. Gathering of Ancient Tribes