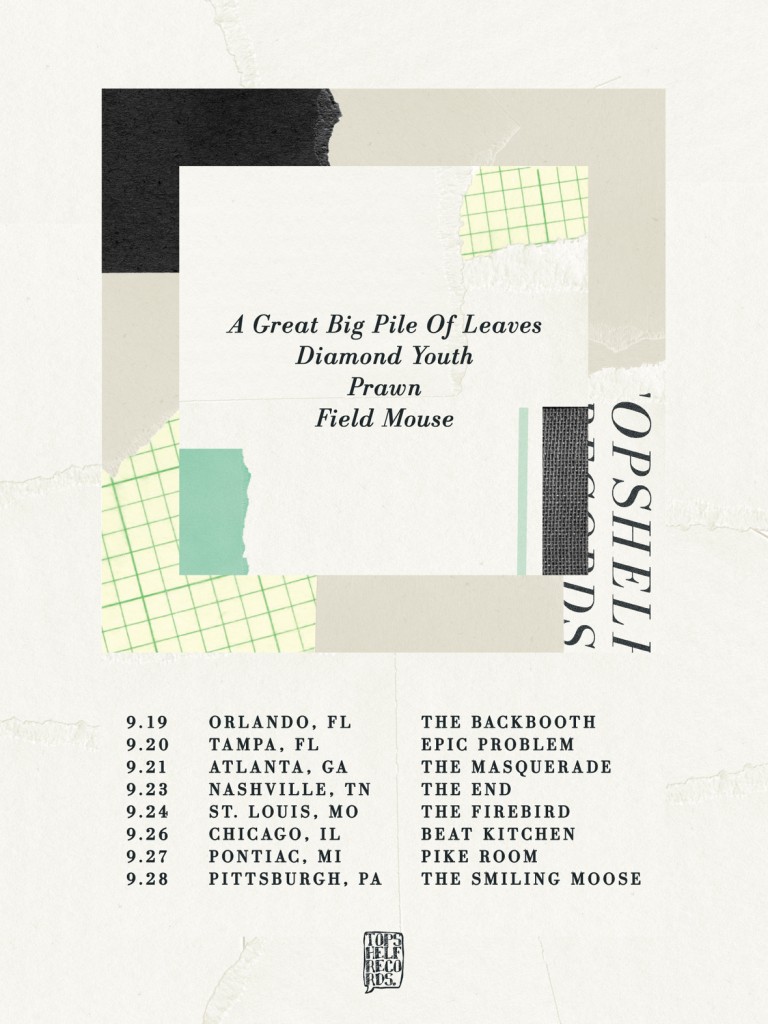 Boston’s Topshelf Records has announced dates for the first-ever Topshelf Records Tour, which will be headlined by Brooklyn, NY indie rock outfit A Great Big Piles of Leaves, with support from label mates Diamond Youth, Prawn and Field Mouse. The tour runs September 19-28, with additional dates to be announced.

The trek is co-sponsored by New Noise Magazine and AtoZ Media (which will partner with TSR to issue a special tour 7″, featuring tracks from all of the bands).

A Great Big Piles of Leaves’ most recent LP “You’re Always On My Mind” was released in 2012 and debuted at #8 on Billboard’s Alternative New Artist Chart. The album marked the band’s first time using outside help in the studio, with Ed Ackerson (Limbeck, Soul Asylum, Polara, The Replacements) producing and Roger Seibel (Deathcab for Cutie, Andrew Bird, Bon Iver) mastering.

Topshelf Records will be re-releasing A Great Big Pile Of Leaves’ first full length, 2010’s “Have You Seen My Prefrontal Cortex?”, as a 2xLP vinyl set on September 23rd.

Baltimore, MD alt-rockers Diamond Youth are currently on tour in the UK with Citizen and Headroom. The band’s most recent releases include the “Shake” EP and the “Orange” LP.

New Jersey emo saviors Prawn are gearing up for the August 12th release of their new LP “Kingfisher” which was produced by Gregory Dunn (Moving Mountains). The band played select dates with Into It. Over It. earlier this summer and will kick off a tour with The Hotelier and Foxing next week.

Tickets for the Topshelf Records Tour will go on sale this Friday, July 25
at 12pm est..

A Great Big Pile Of Leaves